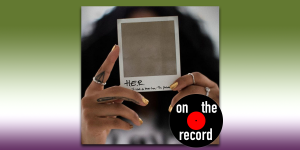 This may be the first week of the spring semester, usually a time for forward steps and future plans, but I can’t help feeling reflective to start things off.

Firstly, thank you to everyone who picked up a copy of The Vanguard, visited our website, checked out our social media, or even took a second or two to think to themselves, “who the hell are these Vanguard people?” Believe me, we’re still trying to figure it out ourselves. On the Record has been a labor of love, an experiment, and something I’m excited about fine-tuning in the coming semester.

I’ve only been back stateside for a mere ten days, and I miss Glasgow dearly. A few weeks ago when I was taking the train out of London, I noticed a billboard advertisement that prompted the question: “Where do you say you’re from? Do you say the name of the town you were born in? The city you moved to? The place where your job is?” The picture of home can shift — sometimes over and over again — but I think I will always consider Glasgow part of my home.

I’m writing this first column from the very comfortable living room of my new Brooklyn apartment, a space that feels safe, warm, inviting, and the most like a permanent home in a number of years. Those of you with an exceptional memory might remember some of the reporting I did in the past regarding the college residence hall. Though I cannot speak for everyone — my experiences are entirely my own — I can say with confidence that my new home is the preferable place.

And just like home can change, people can too. Normally, I despise the practice of making New Year’s resolutions. I have two sides —  hyper-organized expert and free spirited hippie — and resolutions don’t really fit into either of those. But this year, 2020, seems like a good year to start digging a little deeper into what I want my goals to be and how I can go about achieving them. More specifically, thinking about who I was a year ago, versus who I am now, versus who I would like to be. That’s why this week I listened to H.E.R.’s 2018 album: I Used to Know Her: The Prelude, which was nominated for album of the year at the 2020 Grammys.

At the time of writing this, the Grammys are only a few hours away, the results are still unknown, and I don’t particularly care.

Let me put it this way: The Grammys, at their best, can shine some especially important spotlights on new artists, artists who are reaching outside the box, and artists who have a deep passion for the music they create. At their worst, things essentially become a popularity contest. Those two sides of the spectrum, and the whole mess of a gray area in between, could be a whole other column.

At the end of the day, it should always be about the music: What is the artist trying to say? How is the music making us feel?

I Used to Know Her was released in two parts over the course of 2018, though the transition from song to song is smooth enough that you’d never know. Gabrielle Wilson is only 22 years old, another thing you’d never know just by hearing the tracks. Using the stage name “H.E.R.,”  she sings with a voice that sounds much older and wiser.

Her lyrics are mature, touching on topics that most artists take years to pluck up the courage to write, but it’s what she says between takes that stands out. During “Good to Me”, Wilson can be heard talking to presumably her producer or a musician in the room. She begins to explain the meaning behind her words:

But it’s a man that is good to me.

And you have to think of who you really want to be.”

I Used to Know Her is a pure, honest R&B record, and, as they say, they don’t make them like that anymore. These records emphasize the serious value of rhythm, and prove that the only people who truly, unequivocally have a handle on rhythm are jazz players and R&B singers. Having a good vocal range and a clear tone is only half the battle.

Making it in the modern industry as a young artist has always been challenging. It’s especially challenging if you’re a young black woman. The barriers that stand in the way are daunting, but Wilson seems determined, focused, and only just beginning to tap into her talent.