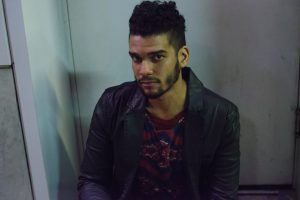 Tahir Karmali, multimedia artist and BC instructor./ courtesy of the artist

Originally from Kenya, Tahir Carl Karmali is now based in Brooklyn and teaches at Brooklyn College. He works in a number of different mediums and disciplines including sculpture, photography, video, and sound. His body of work investigates the often harrowing socioeconomic and political origins of material, while offering viewers an engaging and powerful aesthetic experience. We met at his studio to discuss his work, the nebulous distinction between design and art, and what teaching means to him.

JC: What did you study in undergraduate?

TCK: My undergraduate degrees are in hospitality, marketing, and econ. It was mostly focused on marketing, what was interesting about the marketing degree was that there was a focus on marketing intangibility. For example, a hotel can tell you what it looks like and about the size and space, but it selling it mostly hinges on the service and experience. So some of that stuck–the idea of communicating something intangible to people and using that language or trying to figure out the narrative of something quite hard to grasp. I think something that is very difficult to grasp is our complicated and implicit nature of how we perform in this economy. That’s what I think about when making work: “how am I communicating something that is intangible, and putting that idea into an tangible object?”

JC: I think that your Paradise works [a series of photographs screenprinted onto canvases] relay that in a really poetic way.
TCK: It does feel like that. People always tell me that those pieces look like the feeling of a memory or dream. It’s interesting because you’re looking at my memories, but you’re also looking at photographs. These photographs were taken in my mother’s native country of Seychelles, so there is a literal representation. With the fabric, dye, and the fact that a lot of the detail and color of the photographs are removed and replaced with halftones–the closer you get to it, the more abstract it is; The further away you are from it you are, the more you understand it. And that plays around with how one might think of dreams and memories–the harder you try to get closer to a dream, the more it fades away. I created Paradise as one of those in between projects, which usually happens when I need a break from the rest of my work which is very focused on socioeconomic and political issues.

JC: Do you show your students your work?
TCK: I’ll show it to them if my work is relevant or when it makes sense within the class. Certainly when it comes to diagrams and sketching out sculptures. Lotus, for example, comes entirely from diagrams. From sketches in my notebook to software on the computer, then its reinterpreted into a three dimensional work. That’s basic 3-D design. So I’ll go into the process behind making Lotus, but I might not go in depth about the concept. I also talk a lot about ready-made and assemblage in regard to sculpture within the context of my work as well. So I only really talk about my work when it’s necessary, or maybe if I’m showing in the city. I sometimes have a fear of showing my work to my students (laughs). Maybe I’ll show them when the semester is almost over and they understand my temperament. I think because our in-class discussions can get really crazy.

One of my jobs in teaching 3-D design is to get my students to understand that the craft of making does not qualify something as being an artwork or a design work. Also, that if something takes a long time to make it’s more valuable than something that takes a shorter time to make. I want them to value not just the craft and duration of making but also the craft and duration of coming up with ideas. I also stress recontextualization and decontextualization of materials through design and craft. All of these things take time.

Coleman: I’ve heard that you give your students workbooks that they’re supposed to turn in at  the end of the semester. What’s that for?

Karmali: Yes, there’s a workbook. You have to sketch out and draw your ideas for sculpture. You can’t really just go to a fabricator with an idea, you need to have something drawn out, period! I expect my students to do a lot of research in order to understand where their ideas are coming from. 3-D design is learning how to think like a designer. You can draw ideas and come up with ideas by just feeling or playing with the material, but you gotta start by drawing it all out.

I also need to see that what they’re working on isn’t just happening in the last two weeks of the semester–I can always tell if someone has spent the minimum amount of time on their project. So, there’s the workbook and then three papers that I make them write throughout the semester. All of these exercises are to push them to think critically about design because, you know, what’s the point of taking my class and then going to Sculpture 1? There has to be a difference between the two classes, so I really try to make mine design focused.

Coleman: Your class seems to be focused on the meaning of design and looking at the difference between design and art. What is that for you?

Karmali: It’s constantly in flux. I think that you can even think of painting as a designed object. You can reason anything to be a design object, I feel that you can think of a painting as a design object. Design starts with a problem. Let’s say I’m an artist and I need money. I can look at the art market and look at what’s selling right now. People are buying colorful paintings, so then I make colorful paintings and put them on the wall in order to be sold. That’s a straight up design process. Kehinde Wiley, for example, always talks about how as a young child he loved baroque and renaissance portraiture, but none of the subjects looked like him. So he changed that. He fixed that problem by making the paintings that he did, paintings with people who look like him.

Think Marcel Duchamp, Ana Mendieta, Robert Smithson, Eva Hesse–I’m very much inspired by these people because they added their process to already designed material. I love the idea of sending a readymade object through a process.

Coleman: You seem to be hyper-aware of the material that you use for your work. Do you try to impart some of this conscientiousness of material to your students?
Karmali: Yes, we speak about this when we discuss recontextualization and the imbued meaning, or spiritual meaning, that a material may have. I think it’s a very typical Kenyan thing to be so mindful about the source and context of material. Whether it’s spiritual or historical, there’s an innate understanding of these associations. In America right now, there’s a huge discussion of the origin of things, how things are made, etc. It seems like people are wanting to know where things come from. I try to teach this to my students, especially if they’re artists, because it’s important to understand the context of where they might be placing things. This is something that I am constantly thinking about.