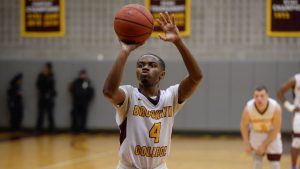 The Brooklyn College men’s basketball team is looking to salvage what’s left of what has been a tough season after dropping games to Baruch and John Jay.

The Bulldogs were unsuccessful in their attempts this week to put an end to their losing streak falling to Baruch College on Wednesday 86-73, and then to John Jay College on Saturday 79-60. They now sit  9-15 for the season and are 6-7 in conference play. Senior guard Anthony McClean led the way for the Bulldogs with 19 points while sophomore guard, Kayin Olajide added 15 in the loss to Baruch.

Against the top team in the conference, the Bulldogs were up for the challenge against John Jay leading 34-29 going into the second half. But they were blitzed off the court in the second, giving up 50 points to John Jay and scoring 8 points less than they did in the first half.

Rebounding has been the achilles heel for this team and this game was no different, as the Bulldogs were outrebounded 34-25 by Baruch and were dominated on the boards by John Jay 45-29. Now for the season, they are outrebounded 998 to 856 and are averaging at least 6 less rebounds per game.

This season for the Bulldogs has been rough to say the least, with the team sitting at 9-15 for the season, 6-6 for the season away from home and 3-9 at the West Quad Building,  They currently sit 5th in the standings.

With the season coming to an end, the Bulldogs must look past what has been a tough week of games and prepare for Medgar Evers on Tuesday, who is currently 7-17 and are sitting right behind the Bulldogs in conference play at 4-9. This gives an opportunity for the Bulldogs to end their losing streak against a weaker opponent.