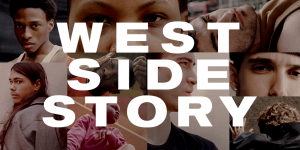 To make old new again. These are words that truly resonate with Broadway’s newest production of West Side Story, but the show is not as new as you think. When I saw the production for the first time during previews last month, I had no idea what was in store.

West Side Story is no stranger to Broadway, having originally opened in 1957 with a book by Arthur Laurents, music by Leonard Bernstein, and lyrics by Stephen Sondheim. It focuses on an ongoing turf war between two gangs known as “the Jets,” and “the Sharks,” with a love story between a former Jet named Tony and the sister of a Shark named Maria being the main focus of the plot.

In this revival, directed by Ivo van Hove, all of that is unchanged but molded to reflect our modern society. The show now features a diverse cast, (including 33 actors making their Broadway debuts) allowing for the gangs to be less about Puerto Rican Americans versus White Americans, but more about two gangs in a territory dispute. In fact, the five lead roles are played by persons of color, a refreshing departure from past productions.

As a whole, the cast is phenomenal, and the chemistry among them is the glue that holds the show together. Jordan Dobson (an understudy filling in for the show’s injured star, Isaac Cole Powell) plays a passionate, angelic Tony that complements Shereen Pimentel’s strong and determined Maria. When they share the stage, you can really feel the love the characters have for each other. Similarly, the tension between Ahmad Simmons as Riff (another understudy filling in for an injured actor) and Amar Ramasar as Bernardo is equally felt. Their scenes together are full of heart-beating tension that provides action and excitement for the show.

The show’s biggest credit are the bold, creative choices made to make this production something new and unprecedented. This includes the use of actual sprinklers to create rain and two small sets designed by Jan Versweyveld, as well as Anne Teresa De Keersmaeker’s choreography for both extravagant dance numbers and simple dance scenes meant to symbolize internal and external struggles that the characters face.

However, the biggest creative feature by far is the use of a large, IMAX-like video screen that provides the show with various backgrounds of the New York City streets. In other instances, this feature provides the audience with alternate angles of the scene being performed right in front of them. This ranges from aerial shots to intense close-ups. There are also moments that are performed off stage in a dressing room designed to look like Maria’s bedroom. These are shown to the audience via live feed that is projected onto the stage’s video screen.

While I admire the creativity behind the choice to use screens to enhance the experience, they often become a distraction. The screens work when they provide images of the setting and provide captions of the date and time for context, but they complicate the show when they are used to provide other angles of the scenes happening on stage or zoom in excessively on the actors’ faces. It makes the audience question where to look and turns something that should be simply executed into an overblown spectacle. At some points, it is almost as if the stage is meant to support the screen instead of the other way around, and the show suffers from this.

As for the scenes that happen offstage, they add a movie-like experience to the performance, and this makes you question if you paid to see the show or to watch a movie. It takes the audience out of the moment and cheapens the experience of live theater.

Despite these imperfections, the show still manages to pull the audience back into the action at certain points, especially in one scene when the fourth wall is broken. This scene involves a character pointing a gun at the audience, acknowledging their presence and inserting them into the story. The audience is less of a witness to the art, but more so a part of it. This decision is the show’s saving grace.

Altogether, the production attempts to try something new, which is admirable, but goes about it in a way that puts the show at a disadvantage. If the show was adapted to be less reliant on the use of screens and more focused on the action on stage, it would be a stronger production.           Despite over two months of preview performances, the show still seems premature and essentially jumps the gun. The show, however, is saved by the music, the script, and the acting. All of these factors give it a strong foundation that should buy it some time on Broadway. This is vital to the show being successful, since it has already been the center of controversy.

People have criticized the production for its casting of Amar Ramasar as Bernardo. Ramasar, who is a dancer with the New York City Ballet, was accused of receiving and distributing sexually explicit images of his female coworkers without their consent. While Ramasar disputes the accusation, many have taken the streets before performances to protest his casting, as well as the production’s initial silence on the matter. Since then, the production has addressed it, but maintain their support in Ramasar and the decision to cast him. This has certainly put the show at a disadvantage, with demands from the protesters to “boo” Ramasar, as well as a call to boycott the show until he is fired. A change.org petition calling for Ramasar’s removal currently has over 49,000 signatures.

In addition, the show suffered two major injuries during previews in Isaac Cole Powell (Tony) and Ben Cook (Riff). Powell has since returned to the production full time as Tony, but Cook was forced to leave the show permanently. The production found a new Riff in Dharon E. Jones, who previously played Action, a member of the Jets, in the production.

While it seems the production has had its fair share of challenges, the show is still a decent rendition of a Broadway classic. If you are an open-minded fan of the original production or just a fan of experimental theater looking to experience something fresh, you will enjoy this show. If you are a proponent for traditional theater and/or triggered by depictions of sexual assault and violence, you might want to stay away from this production.