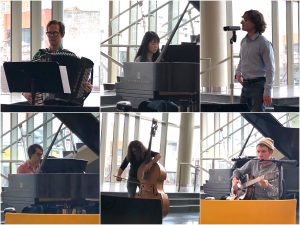 On Tuesday, March 10, the Brooklyn Composers’ Collective performed a one hour concert at the Tow Center atrium. The concert was hosted by Marcello Di Russo and featured original music with many different sets and styles.

Will Holshouser started the concert off strong on the accordion with his “Twelve Statues in the Snow,” which he joked was written in the summer. According to the program, this song “uses a loosely defined series of twelve notes that pile up into shifting, accumulating harmonies.” With a straight face and intense focus, Holshouser started off softly on the accordion. As the song progressed, however, he utilized shifting dynamics and moments of complete silence for emphasis.

Danny Zhang also took this approach in a piano solo called “Novelette.” Written by Eduardo Palacios, Zhang let the music flow out of her hands effortlessly and embraced a variety of melodies. Despite the song’s soft beginning, the repetition of a louder, faster melody allowed for a strong finish.

The next performer, Sebastian Moscoso, took a slightly different approach on the piano, starting his song off with forte dynamics. Prior to performing, Moscoso revealed to the audience his “huge love for soundtracks” which influenced his writing. The song performed, Moscoso claimed, is his “Main Theme” in what he referred to as “a mock soundtrack.”

During the performance, Moscoso’s song reminded me of  an exuberant Broadway overture or even a song you might hear during the opening/closing credits of a movie. Similar to Zhang, Moscoso established his theme by using repetition. Despite a soft finish, Moscoso’s theme had a big impact and made me want to watch a silent movie with his theme in the background. Maybe one day.

By far, the most different act of the day can be credited to Max Johnson, who performed a double bass solo set. The coolest feature of this performance was Johnson’s use of both a bow and his fingers in playing the bass.

With a strong beat, various speeds and moments of tension, it often seemed as if the strings on Johnson’s bass were going to snap. Luckily, this did not happen, and Johnson maintained a steady groove.

While performing, Johnson often made strong facial expressions and could even be heard gasping for air or humming along to the music at various moments. It was easy to see the emotion put into his performance, and I developed a newfound appreciation for the bass because of it.

Lastly, Noah Magnus stole the show as a triple threat, performing three songs via piano, guitar, and acapella. On the piano, Magnus belted “Let It Out” with his loud yet angelic voice. The song allowed Magnus’ personality to come bursting through.

This was especially true when Magnus forgot the words while singing acapella. Normally, this would doom performers, as a common fear associated with stage fright.

Magnus, however, did not let up and even joked about his error.

“You know what? I’ll skip ahead with no context,” Magnus said.

It was at this moment that Magnus’ light-hearted sense of humor and spirit became evident. The audience laughed in response and supported him the rest of the way through to end the concert on a high note.

In closing remarks, Marcello Di Russo thanked everyone for attending and encouraged the audience to come back for the second part on Thursday, March 19.