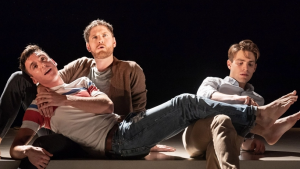 It’s odd enough to review a two-part play in two separate write-ups. It’s even more disorienting when the difference in quality between parts one and two is so clear, and so very disappointing.

Part one of The Inheritance, which I reviewed last week, took my breath away at parts, and at others, left me soberly scratching my head. The casts’ performances were basically perfect, the story had roped me in, and I thought that it spoke poignantly to timely issues. Most of what I was less than enthused about was easy to overlook. And it wasn’t the acting in part two which put a damper on things, it was, to my surprise, the story itself. As a narrative which is itself about the importance and necessity of stories, The Inheritance lacks in the very department which it tries to sell.

When our lead character, Eric Glass (Kyle Soller), falls into a relationship with the late Walter Poole’s partner, Henry Wilcox (the latter played by Tony Goldwyn and former played by Paul Hilton), things look like they’re about to get interesting. When the antagonist Toby Darling (Andrew Burnap) goes off the rails and we finally learn of his torturous past as well as his relationship with the horribly and problematically constructed character of Leo (Samuel H. Levine), we think we’re in for an intriguing treat. When Eric is finally given the house which holds so much weight in the first part, you might think it’s really gonna get good. Then you start to hate Henry Wilcox even more than you probably already did (which is fine, he’s supposed to suck); then the impressively shallow and predictable treatment of Toby Darling’s suicide and Leo awkward forway into a lead character happens; then we get a few more hardly-touching bits about the house. Then it ends, and nothing goes deeper than a few screaming fits from half the characters and an inordinate amount of tears from Eric Glass.

The subtle, soapy slant that the first part handles so well is replaced with an all-out soap-opera tear-binge. This overbearing vacuum of drama was almost campy, but The Inheritance doesn’t get such a badge because it wasn’t over the top, it was simply just too much. Along the way, we’re introduced to the only woman in the play, Margaret. Performed by the incredible 89-year-old Lois Smith, Margaret is the mother of one of the men who Walter nursed as he died of AIDS. Her soliloquy added a much needed step away from the other characters’ plotlines, which, by this time, were becoming intensely boring. Hers was certainly one of the more affecting ones, yet its strength was bogged down by the numerous teary-eyed speeches given by what seemed like half the cast, but not all of the cast (not over the top, just too much).

These less than fantastic moments seem to multiply in the three-hour-long second part, including a headache-inducing Fire Island club scene with Toby and Leo. The odd couple’s stay in the Pines, besides being drawn out far too long, added more fuel to the fire of what is wrong with Leo’s characterization. We first meet Leo as a homeless sex worker whose baggy clothing and timidity struck closer to hackneyed than able to evoke sympathy. When poor Leo falls in love with Toby and realizes, whilst partying, that Toby certainly doesn’t love him back, nothing really happens; they leave Island, and the story goes on. The couple does eventually, and violently, break up, but not until after Leo is “saved” by Eric, who finds him on the brink of death, recently diagnosed with HIV.

It’s not just lazy that Leo, the poor, HIV-positive sex worker, is saved by the play’s wealthy protagonist, it’s also perpetuating a story about sex work that need not be told in a play which, for the most part, is actually very timely. It’s a harmful stereotype that is aggravated further by Leo’s becoming an erudite author (he ends up writing The Inheritance, somehow).

But this all speaks to what is perhaps the overarching problem with the work. On Matthew Lopez’s attempt to tell both a story about stories (the play’s most engaging aspect, which was tragically abandoned), and the 2010s gay work of drama (takes the cake, at least in length) he simply wrote a pretty mediocre story. Despite the still-hilarious back and forth from the peripheral characters and mostly sharp political commentary, the bulk of part two was cloyingly sentimental, and gave us so very little of what part one offered. Too many plot lines, too much time, and simply not enough depth.