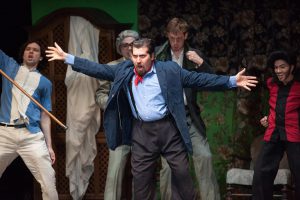 On Tuesday, March 24, the Conservatory of Music at Brooklyn College launched their new “Student Recitals Series,” featuring both undergraduate and graduate students of various musical backgrounds. Due to COVID-19, the recitals will either be live-streamed or pre-recorded.

The series began this past weekend with Alan Briones, a baritone, performing his Master’s Recital via live stream from St. Barnabas Episcopal Church in Ardsley, New York.

The title of the recital, “Chiaroscuro,” was chosen by Briones for its translation to “clear-dark” or as he puts it: “Clarity in darkness.” Aside from his singing style, Briones chose this title as a reflection of his experiences at Brooklyn College.

After years of singing Tenor, Briones decided he was actually a Baritone with help from Maestro Jack LiVigni, his professor at Brooklyn College.

“That decision felt like finding home, and led to an identity change that rippled beyond the vocal into the artistic and even personal spheres,” Briones said.

“In participating in the musical community here at Brooklyn College, the first without knowledge of my history to accept me in my new identity, I was able to find the light in the darkness.”

Briones began his recital by performing the prologue from Pagliacci by Ruggero Leoncavallo. With a late-Romantic Italian operatic style, Briones started his recital off strong.

He explained his choice of Pagliacci saying “It serves both as an opening and a symbolic arrival for me in a repertory I have long been aspiring towards.”

Next, Briones sang some selections from Gustav Mahler’s “Lieder Eines Fahrenden Gesellen.” Translated to “Songs of a Wayfarer,” each of the four songs was inspired by Mahler’s “unrequited love” for Johanna Richter, a soprano whom he met in Kassel, Germany.

With seamless transitions from song to song, Briones took on the perspectives of both the narrator and the “wanderer” in telling the story of a rejected lover and his journey to overcome the pain.

According to Briones, this song cycle is “one of the standards of the baritone repertoire,” and this is why he selected it for his recital.

Briones concluded the first part of his recital by singing the music of Ben Moore. For Briones, these selections were special to him as he got to perform in a recital dedicated to Moore’s music in November 2019.

“Requiem” represents a somber poem by Robert Louis Stevenson, which was a favorite of Moore’s grandfather and read at his funeral. In a similar tone, “When You Are Old” reflects the idea of a William Butler Yeats poem, in which a young man begs the object of his affection to stay with him as she will regret not choosing him when she is older.

In the last two songs however, Moore wrote both the music and lyrics. This includes the nostalgic “Where Has Summer Gone?” and the comedic “I’m Glad I’m Not a Tenor.”

For Briones, this particular song significantly reflects his own experiences, and he chose it to give the audience some insight into what his musical journey has been like in a humorous way.

After a short intermission, Briones returned with Maurice Ravel’s “Don Quichotte à Dulcinée,” a song cycle largely based on the story of Don Quixote.

Through this selection, Briones was able to express the versatility of his singing in which he performed a romantic song, an epic song, and a drinking song. He sang each of these with swift movements and intense facial expressions that made his passion evident.

This selection was also special for Briones as it was the music in which he met Kessa Mefford, the pianist of the recital, and they began their collaboration.

Lastly, Briones concluded his recital with music from Argentina, his family’s country of origin. With works by Carlos Guastavino, Ariel Ramirez, and Carlos Gardel, these selections allowed Briones to not only highlight significant Argentinean composers, but focus on their emotional impact with topics ranging from unrequited love to suicide.

After performing Gustavino’s “4 Canciones Coloniales”, Briones was joined by his brother, Julian, to play guitar for the last couple of pieces.

This included Gardel’s “Volver,” which Briones claimed to have performed more than any other song in his life, and “El día que me quieras,” which Briones said “is a song that every Argentinean knows.”

At the end of the recital, Briones expressed his appreciation for those who tuned in to watch. For the audience, the appreciation was mutual.

“​Bravo Alan! Beautiful singing and wonderful that you decided to go ahead with your recital,” said Cynthia Shaw. “I’m so happy for you and know you will have a great future even if you’re not a tenor!”

The funniest comment, however, came from an unknown user who said “I was clapping! Here in my kitchen!” A reminder that while Brooklyn College has moved online, the school spirit remains.