With most students hunkering down in their homes and taking virtual classes, one might assume the campus is all but 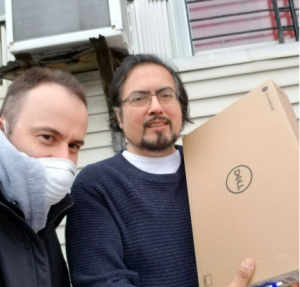 overrun with squirrels, free of human annoyance. However, there are those still working to keep Brooklyn College ticking for the time when we can return to the classroom.

“It’s like being in a park all alone,” said Mike Gershner, 10-year veteran of Brooklyn College’s central routing, which receives and delivers what comes to campus. From pens and pencils to biology equipment and voting booths, Mike sees it first.

“Pretty much everything that comes onto campus comes through us,” Gershner said via phone call from his Roosevelt Hall office. He actually missed the Vanguard’s first call while out handling a delivery of 40 boxes of food for the food pantry. Now, on top of the usual office supplies, Mike is transporting much-needed personal protective equipment and devices for students who need them for online learning.

“The situation feels upside down, just topsy turvy,” he said.

Before the pandemic, Mike supervised a team of five other workers in central routing. Now, it’s down to just him.

“It was much tougher at first, because it is so easy to get overwhelmed,” he said. “You just have to prioritize and start planning your day before the day starts.”

Mike’s day starts in Coney Island, which he drives to and from everyday. At home, he has a wife and two kids, ages four and one.

“The fact that there is no school makes it really really challenging,” he said. Thankfully, his wife, who works entirely from home, is able to take care of the kids while Mike is working. “Personally I think her job is harder,” he said.

Pre-COVID-19, Mike worked 9-to-5, Monday through Friday, but now the hours have changed. Now he is only really supposed to be there on the regular receiving days of Mondays and Thursdays, but he comes when he needs to, like Wednesdays to receive the food pantry orders.

“There’s not a lot of downtime,” he said, but he makes the day a little easier with music or YouTube.

In an e-mail to the college celebrating some of BC’s staff, President Michelle Anderson singled out Mike Gershner.

“When we pivoted to remote learning, he volunteered to drive into Manhattan himself to pick up computer devices for our loan program to students,” she said, “He has a can-do attitude and a willingness to pitch in wherever needed.”

Another staff member William Borgeson, who works in Environmental Health and Safety under BC’s Coronavirus task force chief, Carrie Sadovnik, is working on making the campus safe for when students do return.

“We’ve been dealing a lot with the overall safety planning and guidance for the college,” he said. “We are kind of involved with a little bit of everything.”

He and his coworkers are personally responsible for handing out personal protective equipment to the other on-campus essential workers and making sure everyone, including themselves, stays safe.

“It’s almost paranoia to an extent, because you are always worried about exposing yourself to infection,” he said, talking about the constant hand washing and lack of face-touching.

William works only one day a week on campus, but describes the situation as “fluid,” because he has to come to work whenever he is needed. Most of that work is trying to come up with plans for when people can come back, and keeping the student body and faculty safe. Since coronavirus only lives on surfaces for a few days, the plan is not to disinfect everything, but instead to continue keeping things safe once we’re back.

“We’re preparing plans for when we do go back […] that we have cleaning plans in place to make sure we can clean up after everyone,” he said.

One of those ways may be through misters, dispersal machines that William describes as “like a spray bottle on steroids.” The machines can help sanitize entire rooms, or in our case, lecture halls. The current issue is trying to obtain the mister technology, since everyone is looking for the same things.

“That’s what we are up against right now,” he said.

William and his coworkers are currently operating out of Ingersoll, where they have begun keeping the lights off to save power. The darkness, on top of the emptiness, has made things a bit more ghoulish than normal. William suggested that the now vacant buildings on campus should be used to shoot horror movies.

William and many others are adapting to a world and responsibilities much different than what they were used to.

“If you told me two months ago this was going to be the way it was, I would have thought you were crazy. I would have told you that you needed to go to a mental hospital or something,” he said. “It’s completely overwhelming for everybody, and we just gotta make the best out of what we can do.”

As far as keeping campus safe, BC’s Public Safety Chief Donald Wenz has a pretty good idea. He has been in charge of BCs security since 2002, and before that spent 32 years in the NYPD, but his current situation is unlike anything he’s dealt with before.

“It’s a different ball game,” said Wenz, who has continued to travel to campus two to three days a week to help coordinate his officers, five of whom have tested positive for COVID-19 since the outbreak began.

Despite the fact that there are no students on campus, and even the amount of staff is extremely low, public safety still has to stay on their toes.

“Even though there is no one around, we have to make sure our officers stay alert,” he said. On top of keeping other essential workers safe, and making plans for the future, Wenz has had to focus on keeping his own officers safe.

“We have to make sure they are following the CDC guidelines,” he said. Part of this has been supplying officers with much-needed PPE, most of which has come through outside vendors, but also through the theater department’s costume crew, who have been making reusable masks for BC’s essential workers. Wenz has also had to limit the amount of officers who would normally take public transportation in order to cut down on the amount of public interaction that could come to campus.

“We have very few people taking the subway or bus,” he said. Still, his team has just enough officers to maintain coverage of the campus. Wenz himself drives and is making sure he stays safe.

“It’s tough keeping away from my children and grandchildren,” he said. “No one has tested positive so we’ve been lucky there.”

In the same vein as William Borgeson, the vacant campus and darkened hallways have Wenz agreeing that the whole environment feels a lot more ghostly.

“It’s kind of eerie to be honest with you,” he said.

Wenz and his public safety officers have continued to keep campus safe, and hope to continue that once everyone gets back. “We are ensuring we have the proper coverage and planning for the future,” he said, those plans still in the early stages.

While the nation salutes the frontline workers helping to keep us safe, Brooklyn College has its own essential crew, working hard to make sure students and faculty continue to stay safe when we are able to return to our normal lives.

“Our staff members are committed to excellence and willing to think outside the box, a skill that became crucial as this semester turned upside down,” said Anderson in an e-mail to the student body.