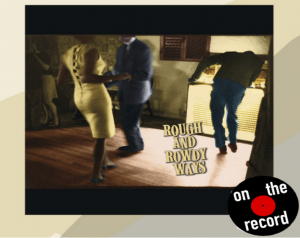 “Today and tomorrow, and yesterday too, the flowers are dying like all things do…I fuss with my hair and I fight blood feuds, I contain multitudes.”

I can’t say that I perfectly understand the nuances of Bob Dylan’s newest record (I likely never will) and I can’t say I know where his mind is heading next (no one has been able to crack that code for years), but I can say that I believe Rough and Rowdy Ways showed up at precisely the right moment in time.

Admittedly, I’d heard through the grapevine months prior that Dylan had something brewing. I remember shaking my head a little — sitting in the bathtub of my parents house in Buffalo with a glass of wine  — when a friend told me a new album was coming, thinking how admirable it is to be a musician who very clearly has nothing left to prove, and yet writes another heap of brilliant songs anyway.

I paint landscapes and I paint nudes, I contain multitudes.”

That was in late March of this year. I’d returned to my hometown to ride out the first wave of the pandemic and I had absolutely no way of knowing that this was only just beginning. Sitting in the bathtub with a glass of wine seemed like such a rare luxury at the time — it still is I suppose — but it seems like even more of one now, the ability to do absolutely nothing except sit and sip. There was nothing else to be done aside from drink to the truth, which was that a global pandemic had struck, and paint whatever the hell paintings we wanted because there was little else to do.

Now I’ve returned to my tiny Brooklyn apartment, there is more than enough to be done, and I can hardly sit still long enough for a glass of wine, much less an evening in a bathtub.

“Tell me, what’s next? What shall we do? Half of my soul, baby, belongs to you. I rollick and frolic with all the young dudes, I contain multitudes.”

Admittedly, I never considered myself much of a social butterfly. I pride myself on being the type of young woman who does things like spend whole afternoons alone at an art museum, or sit solo with a coffee in the park, or drink a lunchtime martini at a bar with nothing but a paperback book with her. The rude irony was that while the isolation that quarantine brought wasn’t jarring, the real loneliness came from missing the city.

The natural tendency is to think of Bob Dylan as the most lone wolf of the pack — almost irresponsibly independent, witty and unwilling to bend, and surely too self-centered to give much thought to his fellow musicians. Yet, on Rough and Rowdy Ways, he starts name-dropping others and running down a list of countless cultural references. Even the instrumentation and structure of the songs is clearly using elements of jazz and blues.

Some of it is poignant and serious, some of it comical, but it proves one thing: that Dylan — the man responsible for influencing millions — is more influenced himself than he’s usually willing to let on.

Of course, it would still be foolish to consider Dylan as one individual. He couldn’t have written it any better: “I contain multitudes.” Dylan, well-read and aware as ever, is a conglomerate of hundreds of people, places, and periods of time. We are no different. I had always enjoyed being a solitary person, but isolation showed the other edge of that sword. It peeled back the curtain for all of us to meet those other versions of ourselves, those multitudes.

“I sing the songs of experience, like William Blake, I have no apologies to make. Everything’s flowing all at the same time, I live on a boulevard of crime. I drive fast cars and I eat fast foods, I contain multitudes.”

Only Bob Dylan could get away with releasing a 17-minute track about the assasination of JFK and release it in the middle of a global pandemic, but as he notes, there are no apologies to be had on his part — he’s done it all and can’t ever be taken down. I wasn’t around for President Kennedy’s death, nor most of the other historical events Dylan’s sung about, but that also doesn’t matter, I have the songs of those experiences. If Dylan is off working on some songs about the time quarantine, I look forward to hearing those experiences too.

“I’ll sell you down the river, I’ll put a price on your head. What more can I tell you? I sleep with life and death in the same bed…I’ll play Beethoven’s sonatas and Chopin’s preludes, I contain multitudes.”

My perception of quarantine has been a fortunate one. I’m lucky enough to have a set of financially stable parents and a place to escape the city from if needed. No one close to me died, no one in my household was ever sick, and I try not to take any of those things for granted. I couldn’t quite explain why Rough and Rowdy Ways seemed to appear at just the right moment in time, but it likely had something to do with Dylan’s repeated reminder: human mortality is fragile, no matter what anyone tells you, and that life can be long and full of art, music, song, and dance, but it can also be tragically cut short.

When Dylan was asked about the death of George Flloyd in Minneapolis, he called it “sickening” and “very ugly.” He didn’t really need to say anymore. What more can he tell you? He’s been writing about this — about people who have been dragged, punished, or killed for nothing more than existing as who they are — for decades. He is no stranger to seeing the pawns in the game get violently taken away.

In conversation with a friend last week, we mused about what Bob Dylan must be like to have dinner with. What does he talk about with people? Does he talk much at all? Who does he pay attention to and who does he cooly ignore?

We’re back to his words again: I contain multitudes. So does America, it appears. And so do you, and I.