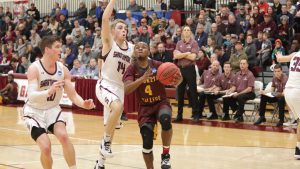 On July, 21, 2020, the City University of New York Athletic Conference and member Athletic Directors decided to cancel all fall 2020 sports. Amidst the ongoing pandemic, officials made the decision that it was not safe to hold intercollegiate competition.

“While we do not have a concrete timeline, the CUNYAC with the directors of athletics decided to postpone all fall sports practices and competition. We especially feel for our student-athletes, as we know how much hard work and dedication is involved in being an NCAA Division III student-athlete, and how much the season means to them,” said Bruce Filosa, Director of Athletics at Brooklyn College in a statement to the Vanguard.

For many students, their respective sport offers not just an extracurricular activity. It helps out with their academics too.

Men’s Tennis Captain Rohan Mathur told The Vanguard in February, “Tennis makes studying a lot easier for me because it forces me to manage my time around practices and matches and avoid procrastination.”

Now, there is a large void left behind by the absence of a regular fall season. Student-athletes in search of a safe haven no longer have the luxury of relieving their stress on a court or field. For freshmen excited to compete on campus and beyond, the absence of sports has proved a harrowing lesson that college is not what they thought it would be.

For upper-classmen, the lack of sports represents a changed and unknown landscape. With no certainty on their return, many wonder if once sports do return, they will even be the same.

“The fact that the season was canceled was upsetting. I was looking forward to playing my senior year for BC. We had high hopes for this season, but due to circumstances it all went downhill,” said Miguel De Anda, starting fullback for the Men’s Soccer team.

“Hopefully the season will continue in the Spring and [we] hope for greatness.”

Kimani Laylor, defensive teammate of De Anda, told the Vanguard, “As a student-athlete heading into my junior year, I was truly looking forward to making an impact this upcoming season with my fellow teammates.”

Sports are not necessarily seasonal, even if their calendar of games says as much. The work that goes into the offseason–relentless training, working out to get better, building chemistry with teammates–sadly seems it was all for naught.

“During the offseason we stayed working, building our chemistry. We were hungry to win the chip this year. Unfortunately the season has been canceled so that won’t be happening, but there is hope that we may have a Spring season. And if so we will be ready to go,” Laylor concluded.

The uncertainty surrounding the future is harrowing and makes daily tasks difficult. How can one plan for the future when they are unsure of what that future will even look like?

Players trained in the spring and summer for this season. And now that it’s cancelled, they have to stay fit, agile, and ready for whenever an announcement will be made on the upcoming seasons and semesters.

In regards to playing in the spring, Filosa said, “We will explore the possibility of moving Fall sports seasons to the Spring and other creative ways to try and give opportunities to our student-athletes, but we must be mindful of the uncertainty of our time and that our primary concern will be the health and safety of everyone.”

Sports offer an escape for so many individuals. For Brooklyn College athletes, that escape, at least in an official school capacity, will have to wait.

← Newer Post
BC’s Made in Quarantine Film Festival Shows Life During Virus
Older Post →
On the Record: The Killers, “The Mirage”