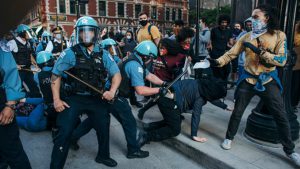 Police VS Protestors at a protest against George Floyd’s murder./ CNBC

Hey there reader, let’s you and I make a classic summer pact: let’s make this past summer the one we’ll never forget. I can’t neatly tuck the last few months away, and try as we might to make it disappear, I think it’d be a betrayal to let it slip from our collective memory.

At the beginning of the summer flick I’m cribbing this trope from, the friends usually form up and assert that they should make what’s going to follow “the summer they’ll never forget.” It’s a warm moment. When they express it, it’s a signal to the audience to suspend their disbelief. Everything good that could possibly happen to these characters is going to come to pass — what an innocent thought.

It’s a sentiment that, while sweet, rings a smidge naive in the reality we exist in. Because while those characters get to act out their dreams come true, we’ve been in some unrelenting nightmare.

Generations of Americans have long had a series of defining events or traumas that shaped them. The Greatest Generation had WWII and the Great Depression, while baby boomers had the Cold War, the Civil Rights Movement, and Vietnam. Millenials had the war on Terrorism and recession of the 00s, and alongside zoomers, now share in the pain of this ongoing pandemic and never-ending social unrest brought on by increasing political polarization and the stoking of long-standing racial tensions.

This summer has been our defining trauma, this moment in time solidifying as the crux of what will drive us forward. If we were ever looking for the point of inflection in this generation’s history, I’d say this is it. This is the one we can’t ever let go of even if all we want to do is forget it.

At this point, I’ve heard every variation of that same old tune: 2020’s been the worst. And while 2020 has reeked, the summer of 2020 has been a very specific hell. A virulent plague has continued tearing through the world, leaving hundreds of thousands dead, all of our structures and systems vulnerable, and the survivors of it sheltering for dear life or risking it for some sense of normalcy or even just an inkling of money.

Or maybe you went to a protest because unending police violence against black communities has stirred you to call for the reform or abolition of such institutions.

Perhaps us rapidly accelerating towards an election that has everyone positing that we’re watching the deterioration of America has been a cause for concern.

And of course, whether you’ve been sheltered or not, it’s probably been hard to ignore the fact that this planet is growing excessively warmer and dangerously inhospitable. 2020 has been outright miserable, the summer especially so, and there’s still time on the clock…

This has all happened before, but never quite like this. In our lifetimes alone, we’ve had numerous outbreaks and at least one recession before the one we presently face. In the summer of 2014, a lot of our generation was made starkly aware of the realities of police brutality and violence when Eric Garner was strangled here in New York and Michael Brown was gunned down in Ferguson. We’ve lived through uncharacteristically warm winters and some of the hottest summers ever. And as for the state of our nation…well, I’ll simply gesture at the last few years.

The problems never cast a shadow this large. The wall didn’t always look this insurmountable and the situations never seemed quite so dire. So yeah, for reasons entirely unlike the saccharine ones we put stock in early on, this has been an unforgettable summer. Or at least it should be.

The accompanying refrain that’s become a siren song to many has been the call for 2020 to be over. People have reasonably bemoaned the horror the year’s been, and yearned for the supposed release of 2021. And while I’ve engaged in these flights of fancy myself, the truth remains that forgetting and hoping distance will solve things only ensures that none of the work to get out from under the conflicts threatening us gets done.

Let’s not forget the broken economy we’re going to inherit. Let’s definitely not let the police go unexamined and unbothered. Let’s not just vote for someone who feels or sounds right. The era of our lives that will emerge from this is, and always will be, much different than what preceded it.

I long for normalcy as much as everyone, but we’ve got to think up and manifest something newer and bolder. It’s incredibly likely there have been better times to remake the world we live in, but there’s never been a more necessary time than now to act on it finally.

It’s not news that the circumstances under which we all lead our lives needs drastic reevaluation and reform. And if it is news to you, you’ve had the privilege to turn a blind eye to it all. Structures and systems that have clearly failed a large portion of who they serve demand change. Luckily for us, people around the world, though perhaps more specifically in our own backyard, have explicitly shown what change looks like.

When one of our presidential candidates says he’s fighting for the soul of America, I can’t help but think of the actual fights going on on the ground, spearheaded by folks who were all but forced to demand better. I think of communities that have come together and served their own interests because politicians and corporations have upheld institutions that threaten to tear them apart. I think about the power the average citizen didn’t know they had until they had to brandish it like a weapon to survive. It’s been a revolutionary summer.

I’m not here to tell you what to do but I am here to tell you change is in the air. This past summer probably wasn’t what any of us wanted. Hell, the state of everything is the furthest from ideal it seems to have ever been. But that’s why I’m urging you here and now to not let this be a footnote in our history. Don’t forget what happened here and don’t let what may come of this be forgotten either.

Moises Taveras is the Features Editor at the Vanguard. When he's not doing that, he's playing video games or spending far too much time on Twitter.
View all posts by Moises Taveras →
← Newer Post
Welcome Back? BC Returns for Fall, but Mostly Online
Older Post →
Wakanda Forever, Actor Chadwick Boseman Dies at 43