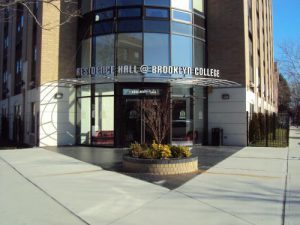 After years, the Residence Hall at Brooklyn College has finally shut its doors. According to a former RA, the building at 1 Kenilworth Place stopped operating toward the end of July.

Though the building continued housing students after Brooklyn College’s campus closed, numbers dwindled significantly as many students moved back to their parents’ homes. Because the fate of the fall semester went unannounced for most of the summer, potential residents like freshman or transfer students were also not making definitive move-in plans.

For many, the residence hall’s quiet shutdown seems to deny its infamous reputation. Known across Brooklyn College’s campus for dirty conditions, floods, and a hostile environment, RHBC has attracted unwelcome attention for years. In May 2019, both the Kingsman and Excelsior newspapers reported on grimy conditions and reports of sexual harassment by employees at the dorms. The articles followed YouTube videos and a short film about the residence hall released by BC film student Chris Omar. Over the 2019 fall semester, The Vanguard repeatedly reported on floods at the dorms.

Joann Johnson, the former bookkeeper at the residence hall, said that the owner didn’t share with her why RHBC is closing, or if the building would be sold.

All she knew was that it was shutting down.

“The residence hall is not opening back up,” she said. “It’s closed; it’s locked.”

In May, Brooklyn College let its advertising contract with the building expire.

“Brooklyn College is unable to provide any assistance to students interested or residing in the building,” Ron Jackson, Vice President of Student Affairs, wrote in an email on May 22nd. “Brooklyn College has no involvement in the management or operation of the facility.”

The school’s conspicuous attempt to dissociate itself with RHBC came as the result of public complaints from students following the newspaper reports and Omar’s short film. Omar, who graduated in Spring 2020, is sure that RHBC’s closure is the latent result of generated publicity.

“I knew once we released the documentary — and the media attention surrounding it — they could no longer carry on their money-grabbing practice of exploiting Brooklyn College students,” Omar said. “While I wish this had happened years ago, I am glad they are finally out of business. All in all, I’m glad no one can be exploited further by RHBC.”