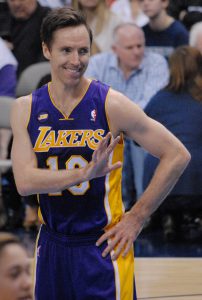 After short search for a replacement, Steve Nash was announced as Head Coach of the Brooklyn Nets on Sept. 3.

Nash, an eighteen-year NBA veteran, eight-time All-Star, two-time recipient of the NBA’s Most Valuable Player award and Hall of Famer, is known for his keen basketball mind, silky-smooth jump shot, and leadership qualities.

After retiring from the league in 2015, Nash largely took a back seat from the limelight. In addition to infrequently commentating on soccer matches (both domestic and abroad), he took on a part-time consulting position with the Golden State Warriors.

As most of us sports junkies know, 2015 was the Warriors first title this millennium, and Warriors star Steph Curry has been compared to Nash in his ball-handling ability, shot, and leadership intangibles (though most agree Curry has already eclipsed Nash).

However it was a year later when Nash oversaw perhaps the biggest change in his future. Kevin Durant decided to join the Golden State Warriors, and for the next three years, a bond between Nash and Durant was formed.

This, clearly, had an impact on the Nets’ decision to hire Nash as the team’s next head coach. With a healthy Kevin Durant and Kyrie Irving next season, presumably partnered with rising youngster Caris Levert and good friend of the aforementioned duo DeAndre Jordan, expectations will be high for the team hailing from the most populous New York borough next season.

So why then, did Sean Marks, a man who has shown his ability to be among the best GM’s in basketball in the culture he set in Brooklyn and rebuild he oversaw, hire Steve Nash, a man of no NBA coaching experience?

Because superstars run the NBA, and in many senses, they always have. Marks needed a coach that, the moment he steps into the building everyday, commands the respect of his star duo, especially concerning the enigmatic nature of Irving and to a lesser extent, Durant.

“Every time I’m in the gym with him, I was always like a sponge,” said Durant.

Sean Marks made a high profile pick with the Nash hire to a four-year deal. It’s not the mecca of New York, but Brooklyn isn’t Indiana. Expectations will be sky high for this group next season.

When Nash was hired, a side story of the move was people noting that this hire was an example of white privilege. “What black retired NBA star would get a four-year deal right off the bat with no experience?” pundits pondered.

The NBA, a league made up of roughly 80% Black players, has only five Black head coaches. So even if one argues that Nash’s relationship with Durant and overall basketball acumen made him the right move for the Nets, the hiring still opened up a conversation about equality in the league and more savvy Black men (and women) deserving a fair shot.

Whatever the case, New York and the world alike will be giddy in anticipation to see how Nash, Durant and co. will do.