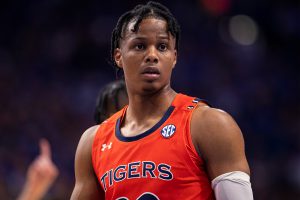 After an abysmal shortened season, the New York Knicks are again drafting in the lottery, hoping to find another cornerstone player to turn their fortune around.

And though the Knicks have dropped to the number eight pick, failing to get in the top three, there’s still plenty of valuable prospects in this year’s draft that the Knicks can fit alongside  R.J Barrett and Mitchell Robinson.

One of the players on many mock draft boards for the Knicks is Auburn forward, Issac Okoro.  The 6’6” freshman was outstanding during his time at Auburn, Averaging 12.6 to go along with  4.4 rebounds and two ast.

He is a versatile wing where some of the main strength is exceptionally high I.Q, nack to get the rim, and explosiveness driving into the paint. He is a player who can defend wings and even some small-ball power forward. Though he has many upsides, Okoro struggles with shooting from 3, averaging 28 percent from deep.

One of the many significant needs on this Knicks roster that can be filled in this draft is the guard position. One player who can fill that need is Iowa State Point Guard, Tyrese Haliburton. Halliburton, who played two years at Iowa, is 6’5” and, at times, has drawn comparisons to Lonzo Ball due to his length and defensive capability.

He is a solid playmaker averaging 6.5 assists, and a pest on defense with 2.5 steals a game. Like Okoro, Haliburton is still a work in progress as he needs to improve at shooting from 3-point territory. Snagging Haliburton at number would be beneficial for R.J Barrett as it will allow him to play off the ball.

Another option for the Knicks is trading up into the top 3. The Knicks have enough assets and moveable contracts to make a trade to get up to LeMelo Ball. Melo, who played overseas, showed a glimpse of greatness while playing for the team in Istanbul. Unlike his brother Lonzo Ball,  The 6’8” point guard’s biggest strength is his shooting ability during his time he was able to shoot off to dribble, while also being really good from downtown. Ball is an all-star and is someone who can come in and become a franchise player for the Knicks day one.

Though the NBA Draft has moved up from the start date from Oct. 16 to as late as Nov. 18, it’s still something many hoops fans look forward to.