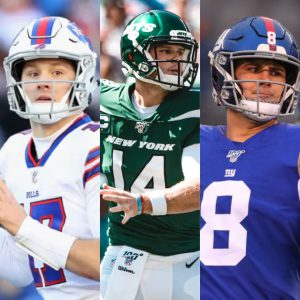 New York Football is back. With the coronavirus canceling the preseason, we had not seen New York NFL football since January 4th, 2020, when the Bills lost to the Texans in overtime in the wildcard game.

With no preseason, the first few weeks of football have the potential to be rocky, but there is hope among fans that some of the New York teams will have decent seasons.

The Buffalo Bills are a team that could make a huge jump this season, having already made the playoffs as a wildcard team last year. Josh Allen is not the most accurate thrower of the ball at times, but has shown an ability to throw deep passes, and he is most deadly with his legs.

He showed that week one against the Jets, rushing for 57 yards and a touchdown. However, even with John Brown and Devin Singletary, the offense still needed top tier weapons. The Bills traded for Stefon Diggs, who made a big week one impact. Diggs had 8 receptions for 86 yards and opened up the field for Brown to have a big game with 6 receptions, 70 yards, and a touchdown in the Bills defeat of the Jets 27-17.

Sean McDermott is also a coach who has improved the team every year he’s been in charge. His focal point has been defense, and the Bills defense has been one of the best in the league. With players like Tre’Davious White and Micah Hyde in the secondary, it is hard for any team to complete passes.

With Tom Brady leaving the New England Patriots, this seems to have made the division a little more open. This could be the perfect opportunity for the Bills to get their first division title since 1995.

The Jets had hope in the offseason, similar to the Bills, to fill the power vacuum, but that dream quickly faded.

The Jets started week one against the Bills and pretty much looked hopeless in the first half. Their defense could not do anything, and Sam Darnold struggled having a 19.3 QBR. Jamison Crowder seemed to be the only offensive weapon the Jets had, which isn’t a good thing.

Le’Veon Bell picked up an injury that looks like he might be out a few weeks, which now puts timelord, Frank Gore, as the lead back, which makes things worse on offense.

The defense looked terrible, and you can tell that trading away Jamal Adams was a mistake. He pretty much was the defense last season, and with him not there, the Jets’ defensive issues were compounded. Along with that, C.J. Mosley choosing to sit out (which makes perfect sense) is the only proven playmaker of this defense.

All in all, it does not look like the Jets will have a very fruitful season.

However, the other MetLife Stadium team, the New York Giants, seemed to be on a different path, with first-time head coach Joe Judge and a young roster. But they still found themselves 0-1 after a week one loss to the Pittsburgh Steelers.

Slayton put up the best numbers with 106 yards and catching Jones’ 2 touchdown passes. However, the offensive line once again seems to be the achilles heel of the team. Jones was always under pressure, leading to inaccurate passes and one interception (the one to T.J. Watt was Jones’ fault). However, the biggest issue was not getting running lanes for Barkley, who had a horrible night of 15 rushes and only 6 yards.

But the defense was able to hold its own throughout the game. Surprisingly, the defensive line was able to get a lot of pressure on Ben Roethlisberger, having 3 sacks and 21 pressures. But Roethlisberger still managed 3 touchdown passes, and Benny Snell Jr. gained 113 yards rushing.

With free-agent signings such as Blake Martinez, Logan Ryan, and James Bradberry, Giants fans had hoped the defense would play better, and they did, but only because last year’s defense was horrible.

The Giants still have the right man in charge with Judge, but Offensive Coordinator Jason Garrett’s play calling on offense was not exciting. On the other hand, the Giants are a young team building for the future and don’t expect to see many wins, just progress, and only go up.