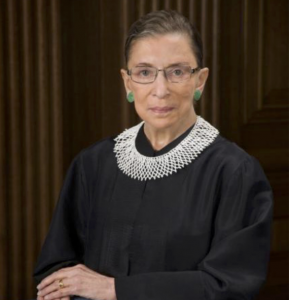 Ruth Bader Ginsburg, a Brooklynite who served as the second woman on the Supreme Court, died last Friday evening due to complications with pancreatic cancer. She was 87.

“Our Nation has lost a jurist of historic stature. We at the Supreme Court have lost a cherished colleague,” said Chief Justice John G. Roberts, Jr. in a statement that announced Ginsburg’s death.

Growing up, Ginsburg lived near Brooklyn College on East 9th Street, graduating from James Madison High School in 1950. From Midwood to the Supreme Court, Ginsburg spent 27 years on the bench deciding on several landmark cases that shaped women’s rights in America. As she became known by her initials, RBG struck down many forms of discrimination, from the Virginia Military Institute’s male-only policy to the gender-based classification between a widow and widower under the Social Security Act of 1935. She was set on the then-radical pursuit of gender equality. One of her most popular dissents was her take on “today’s demolition” of the Voter Rights Act that restricted the protection of minority voters.

“It is like throwing away your umbrella in a rainstorm because you are not getting wet,” Ginsburg wrote in her dissent, making her a feminist icon for younger generations. A law student coined the justice’s nickname “Notorious RBG,” a play on the rap name “Notorious B.I.G.” of Brooklyn-native Christopher George Latore Wallace.

According to the New York Times, after being the lone female justice for a time, RBG became the senior member and de facto leader of the court’s four-member liberal wing. She is survived by her bloc composed of three female and one male justices.

“People ask me, ‘When will you be satisfied with the number of women on the court?'” Ginsburg told National Public RadioCSPAN. “When there are nine.”

Ginsburg’s road to law and advocacy for women’s rights stemmed from a desire to carry out her mother’s legacy and aspirations.

“I pray that I may be all that she would’ve been had she lived in an age when women could aspire and achieve, and daughters are cherished as much as sons,” Ginsburg said during her Supreme Court nomination broadcasted over CSPAN.

RBG faced many adversities that shaped her work ethic and political agenda. While attending Harvard Law School in the late 1950s, she was one of the nine female students in a class of over 500 men. As Ginsburg said in a documentary about her life called RBG, “you felt you were constantly on display. So, if you were called on in class, you felt that if you didn’t perform well, you were not failing just yourself, but for all women.”

Ginsburg came to Harvard as a new mother to her firstborn and wife to her husband Martin “Marty” Ginsburg, who was diagnosed with a rare cancer at the time. Though she had many responsibilities, Ginsburg persevered and was supported by her husband to pursue all she aspired to do.

“He was the first boy I ever knew who cared that I had a brain,” said Ginsburg in RBG. “Most guys in the 50s didn’t.”

Days before her death, Ginsburg knew her life was coming to an end. She dictated a statement to her granddaughter Clara Spera stating, “My most fervent wish is that I will not be replaced until a new president is installed.” In translation, according to NPR, Ginsburg wants the “2020 election to play itself out before the Senate takes up the matter of her replacement.”

Though RBG’s death marked her end as a justice on the Supreme Court, her historic contributions as a litigator and advocacy for women’s rights will continue to live through her landmark decisions.

“I don’t see that my majority opinions are going to be undone,” she told the New York Times in 2013. “I do hope that some of my dissents will one day be the law.”

Ginsburg is survived by her two children, Jane and James Ginsburg, and her grandchildren.

← Newer Post
BC Is Named Most Ethnically Diverse in Nothern Region for 3rd Time; Students and Faculty Want College to Live Up to it
Older Post →
BC Prof NGOC Cindy Pham Helps Her Students and Community During Pandemic