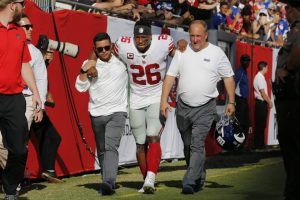 Saquon Barkley being assisted after his injury on Sunday. / Mark LoMoglio/AP

Saquon Barkley’s injury Sunday was perhaps the most devastating in a slew of injuries on week two of the NFL season. The star running back of the New York Giants tore his ACL and is out for the season.

Barkley’s injury underscores a more glaring issue with the Giants franchise. It is a team bereft of leadership and direction. Daniel Jones, the Giants’ second-year quarterback, looks promising some nights, unpromising others. The offensive line, which has been putrid for years, is once again cataclysmic, the defense is nothing to write home about, and the front office makes questionable decision after questionable decision.

When the Giants chose to take Barkley with the number two pick of the NFL Draft in 2018, many people raised their eyebrows. As good as a running back prospect can be, the clear issue is that they are not always able to have as much impact on the field as a quarterback can. Quarterbacks chosen after Barkley in the draft include Sam Darnold, Josh Allen, Josh Rosen, and, oh yeah, Lamar Jackson.

Aside from the latter, are either of those Josh’s or the cross-town rival Jets’ guy Darnold better players than Barkley? No. But when you’re a franchise that is used to competing, and you find yourself in a glorious position to get better, you have to do it. And, from no fault of Barkley’s, the Giants have not. The team finished 5-11 in 2018 and 4-12 in 2019. This year is not going to be better.

The Penn State product’s shifty nature on the field, brutally forceful runs bolstered by his gigantic thighs, and hurdling ability make him not just one of the best running backs in the game, but also a fan favorite for Giants fans, of which there are many. The blow from this injury cannot be overstated when not just considering the trajectory of the franchise, but also the morale of the fan base.

Where do they go from here? A solid running back can be a cornerstone for a franchise, but especially in today’s game, so heavily predicated on the pass, front offices find themselves better served to start with the quarterback and move from there. A solid offensive line, a deep and strong defense, and a charismatic leader at quarterback is how you win at the NFL level. Look at the recent examples: Tom Brady and the Patriots, Patrick Mahomes and the Chiefs, Lamar Jackson and the Ravens, Russell Wilson and the Seahawks, Drew Brees and the Saints; need I go on?

So this is where the Giants find themselves: in no man’s land. Do they sell high on certain players and try to start the rebuild over? Do they adopt the mindset of “we got unlucky with Barkley’s injury, we’ll get ‘em next year?” Do they rethink the way they’ve been doing everything since the Super Bowl in 2012?

Ultimately, these decisions will go to General Manager Dave Gettleman, a man who has shown himself inept at making such decisions. But, alas, this is the man running the show for the Giants right now, and most fans either do, or rightly should, fear the franchise is in a state of purgatory, with no promising prospects moving forward.

Saquon Barkley’s injury is devastating to the Giants faithful, and we wish him the best in his recovery. But it isn’t just a stroke of harsh luck for the red and blue; it may just be the beginning of a reckoning.