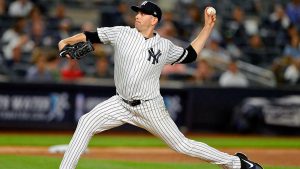 Going into this shortened baseball season, the Yankees were a clear favorite to make it out of the American League and make it to the World Series. However, this season has been filled with ups and downs.

The Yankees would start the season off hot, starting 8-2 in their first ten games, but injuries would quickly play a factor. Starting pitcher James Paxton and relief pitcher Tommy Kahnle suffered season-ending injuries, which will significantly impact the playoff roster.

Paxton was one of the four primary starting pitchers for the Yankees, and with Luis Severino already being named out for the season before it even began, playoff starting pitching was a glaring weakness. Kahnle was a solid pitcher who had a spark out of the bullpen and made an already dangerous bullpen even stronger.

On top of that, DJ LeMahieu, Gio Urshela, and Gleyber Torres all spent stints on the IL. They wouldn’t spend as much time as Stanton and Judge, but with those two big bats out, the team needed to rely on its secondary stars to keep them afloat.

These injuries have led to less productive seasons for those players compared to last season. Also, Aaron Hicks and Gary Sanchez seem to not be their normal selves, with Hicks batting average at .215 and Sanchez’s at an awful .151.

All this led to the Yankees going 14-13 in August and having a seven-game losing streak.

A silver lining is that the injuries have allowed the Yankees to put younger players, that would typically not get a shot to play, into action with some playing time. Deivi Garcia has pitched well at times and has shown promise to be a solid starting pitcher. He has shown that he can pitch in the big leagues. Now it’s just about improving to cement his spot in the rotation for next season, possibly.

Clint Frazier, a fan favorite for Yankee fans, has finally made steady starts out in left field. He has improved his defense, only committing one error this season in 26 games. His bat has been a staple in the lineup at a .296 batting average, with 8 home runs and 26 runs batted in.

After the Yanks fell into a slump losing five straight, they answered by winning 10 consecutive games. Judge and Stanton came back into the lineup during that stretch and seemed to be getting back into form. In a three-game series with the Toronto Blue Jays, the Yankees rattled off 43 runs and 19 home runs.

The Yankees have gotten hot and healthy in September, and with less than 10 games to the playoffs, it looks like they will stay hot going into the postseason. With the Yankees being 3.5 games out from the Division Title, it seems like they will be in a battle to finish fourth in the AL with the Minnesota Twins, who have a 2 game lead over the Yankees.