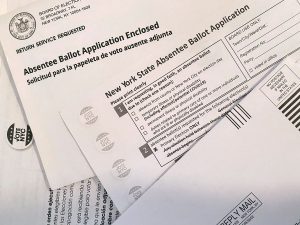 With the national election less than 40 days away and COVID-19 still rampant across the country, many New Yorkers have applied for absentee ballots. A number of Brooklyn voters, however, have reported receiving mislabeled return envelopes.

Of the 140,000 people who have applied for absentee ballots in Brooklyn, around 100,000 voters have been affected by the error, according to Melissa DeRosa, secretary to Governor Cuomo.

Voters across the borough have reported finding their return envelopes printed with unknown names and addresses. A ballot mailed in a mismatched envelope would render the vote invalid.

The New York City Board of Elections (BOE) has blamed the errors on “an outside vendor” hired to deliver ballots in Brooklyn and Queens.  The BOE’s vendor is a Rochester-based printing company called Phoenix Graphics. The company, which has named itself on Twitter “New York’s largest ballot producer,” has yet to comment on the BOE’s accusations.

The BOE took to social media on Monday evening, tweeting instructions to those who have received inaccurate envelopes to message them on social media, email, or call them.

“We’ve obviously called the Board of Elections…and told them they need to figure out how to deal with this right away,” DeRosa told reporters at a news conference on Tuesday.

DeRosa said the BOE was in the process of identifying affected voters so that they could send new envelopes. According to Gothamist, the executive director of the BOE, Michael Ryan, has confirmed that Phoenix Graphics will pay for the new envelopes.

The state began mailing out the ballots on September 18. New Yorkers have until October 27 to apply online, or by fax or email, for an absentee ballot.