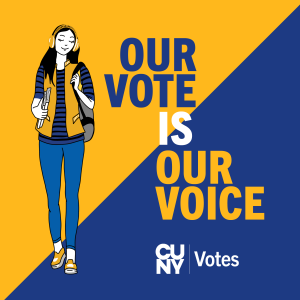 As the presidential election steadily approaches, many registered Brooklyn College students prepare to cast their votes at the polls or with mail-in ballots. Others are not registering to vote or turn out this year due to different circumstances, from voter ineligibility to personal beliefs. In an effort to encourage voter participation, BC’s Voter Registration and Empowerment Initiative (VREI) and CUNY Votes have continued to carry out their services remotely to assist students.

“When campus went mainly online, students were notified via email that forms were available at the Brooklyn College Food Pantry for pickup. Students are also encouraged to register to vote online through the Department of Motor Vehicles website. Our staff is always available to assist students and are encouraged to visit the website or email,” said Hamilton Raymond, Director of Student Activities.

Since 2006, VREI has built part of the university-wide CUNY Votes program. Through campus-based initiatives like VREI, along with “external partnerships and university-wide campaigns,” CUNY Votes intends to encourage voter registration, participation, and awareness. However, at Brooklyn College, the number of students asking VREI for registration assistance or voter rights information was reliably low.

“The number of students seeking assistance has consistently been low, even before the pandemic. Many students inform us that they registered before entering the college,” said Raymond. The initiative does not have specific data that supports this finding.

“The office provides support and resources, including forms, but it does not keep or track that data; that is not the role of voter assistance programs,” said Raymond. “Students who apply for financial aid, however, need to be registered to vote.

In a Vanguard poll on Facebook group “BC In the Know 2,” 40 out of 44 members who answered the poll said they are registered to vote and will turn out in the general election. One poll participant said they were registered but would not vote in the coming election, while another three students shared they are not registered. Most students who responded to the poll and conversed with the Vanguard do not know of VREI or it’s services.

“I don’t know about the initiative, sorry,” said BC alum Sunmbal Aziz who registered to vote on-campus in her sophomore year.

“This guy was going around campus and getting people to sign up, so I did,” said Aziz. “I haven’t voted before, but I will this year.” Aziz admits she “doesn’t really follow politics much,” but she knows that “it’s important to vote.”

Like Aziz, BC student Cam Pham, who registered to vote in high school, does not know of VREI, but he gained access to voter registration and information before entering the college.

“Through my high school, they had someone come into my gov class to get us registered,” said Pham. “I have voted, and it was through the mail, so it was super easy and simple. I plan to vote this fall by mail again.”

Other students, like Inna Yedzinovic, do not have the option of registering to vote due to their lack of US citizenship.

“I am not a US citizen, so I cannot participate in the elections. As a result, I have not yet been interested to know how to vote in the US,” said Yedzinovic, who is generally “not super interested in politics.” But, Yedzinovic said, “I read books, news about the American political system, and et cetera, as it is the country where I live right now.”

For BC student Arielle, who did not wish to share her full name, she is not interested in registering to vote anytime soon, but she is aware of her voting rights.

“I choose not to vote because I, unfortunately, do not care enough yet to vote. I haven’t had a presidency affect my life to where I felt the extreme need to vote,” said Arielle. “Maybe if a civil war breaks out or something.”

To encourage youth voters to hit the polls, both in local and general elections, CUNY recently announced its partnership with a city initiative, NYC Votes, to create a text-campaign called We Power NYC. Through this campaign, CUNY plans to encourage 25,000 students to vote during this presidential election year. In a CUNY Votes Summit last February, Sabrina Castillo, Director of Partnerships and Outreach at the New York City Campaign Finance Board, stated that “CUNY has higher voter registration, but in some local elections, the turnout is not as high.”

Though youth voter turnout has been historically low, 63 percent of voters under the age of 30 indicated they will vote in this coming presidential election, as reported by the Harvard Youth Poll. With only 34  days until the general election (as of press time), most registered Brooklyn College students plan to show out this year and form part of that high voter turnout projection. But for those who are not yet registered and interested in voting this Nov. 3, nine days remain until the NYS deadline–giving CUNY and Brooklyn College some time to make their final stretch in aiding eligible students to register and pledge to vote.