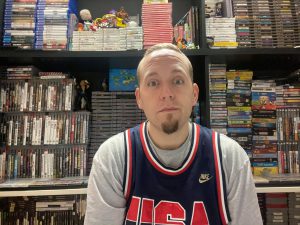 Born and raised in South Brooklyn, BC alum Patrick Hickey Jr. spends his days as a journalism professor at Kingsborough and nights working on his book series, The Minds Behind the Games. Before graduating from Brooklyn College in 2008, Hickey was the former editor-in-chief of the now-defunct Kingsman student newspaper. Throughout his career, Hickey has interviewed some of the most prolific names in the video game industry and chronicled their stories in his books.

Hickey prides himself on his hard work ethic he picked up from his time as a student. While pursuing his associate’s at Kingsborough, Hickey interviewed former New York Mets Captain, David Wright, for the Scepter college newspaper. As a bachelor’s student at BC, he spent 16 hour days working on the Kingsman. He cut his teeth at CUNY colleges.

“I think my work in Kingsborough prepared me to go to Brooklyn College and to take it to the next level. And then Brooklyn taught me how to work in the field and for local newspapers and websites and start my own blogs and make money on the side,” said Hickey. “And then all of that led me up to the CUNY Graduate School of Journalism, which prepared me to write the book and all of those things. So everything is always a scaffolding process.”

The series might not have happened if things went his way. Nonetheless, to Hickey, his collection of development stories represent the culmination of a lifetime of hard work and an heirloom for his daughter to remember him by.

“My daughter was going to be born in a couple of months, and I decided I really wanted to do something I was proud of before she was born. My first idea was to help build the journalism program in Kingsborough,” said Hickey. “I pitched the director of the program a multimedia journalism course I had taught before at Brooklyn College, and he said no. So instinctively I was just like, well, then I’m going to write a book. And his answer was, ‘go write a book, kid.’”

This response lit a fire inside of Hickey. He immediately put his nose to the grindstone and began brainstorming what he should write about in his book.

“I went home, and I was sitting in my man cave surrounded by video games. I love to do interviews, and I love video games. So I thought, ‘I know who created a lot of these games, I should reach out to these developers and I should tell their stories because most of them  haven’t been told before,’ and within a week, the first handful of people that I wanted got back to me,” Hickey said. “This was Halloween of 2016. And by Thanksgiving that year, I had a book deal and I just continued from there on, and by this time next year I’ll have six books out in the series.”

Hickey’s journalism background proved useful for his book series, but eventually he expanded his horizons beyond writing and teaching. The people he interviewed for his book series became his contemporaries when he joined the industry as a voice actor in 2017. His debut game, The Padre, is available on PC, Xbox, PS4, and Nintendo Switch. It’s a creepy and charming horror game that draws on icons of the past such as Alone in the Dark. Hickey voiced the titular character Father Alexander and gave him a flair that only he could.

“The voice actor before me sounded like Russell Brand, just this wacky English accent, and it didn’t really fit the game. I thought it needed to be a lot darker. When they asked me to audition, I wanted to combine that original voice with a lot more bass and baritone. I’ve always been good at that Don LaFontaine ‘in a world’ voice,” said Hickey. “So I combined that deep dark baritone with an English accent and they ended up loving it. Truth be told it destroyed my throat. I was coughing up blood.”

Though video games are known as pastimes, to Hickey and those like him they’re more than that. They’re an art form that millions of people enjoy every day and represent a billion-dollar industry. There’s something for everyone, and there are no limits to what a video game can be. From immersive and expansive worlds like Dark Souls and Skyrim, to competitive eSports like League of Legends and Call of Duty, video games are an interactive medium like no other. 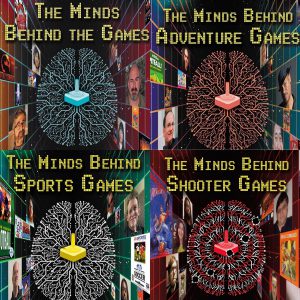 First four books in The Minds Behind the Games./ Patrick
Hickey Jr.

Now that he’s a father, an author, a professor, and a mentor, Hickey’s accomplished a lot in his lifetime. But he never forgets his start as a student journalist at BC.

“For me, it started off as me wanting to preserve history, to be a journalist. And it morphed into something completely different. And I feel like working at the Kingsman gave me the backbone to be able to do the things that I’m doing now,” said Hickey. “Being editor-in-chief was a once in a lifetime opportunity. I took advantage of it and it carried over to nearly every single facet of my life after. I’ll always be thankful for the opportunities that I had in Brooklyn College.”