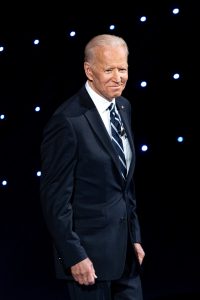 Joe Biden, Democratic Candidate for President of the US./ nytimes.com

I can’t tell you how many times I have heard people on the left speak of others “being on the wrong side of history” in terms of the Presidency of Donald J. Trump. Whether it’s a democratic senator or a left leaning late night talk show comedian, it’s used ad nauseam — so much so that it almost seems complicit. This sort of language suggests that the war is over and the left won. Using this phrase implies that one is looking into the future as a depiction of Barack Obama replaces Andrew Jackson on the $20 dollar bill, whispering “Trump lost!” In other words: “karma, baby!”

Having an advance copy of a history book that has yet to be written is surely comforting to those who feel the learned helplessness of the past four years. However, I am not sure that pandering to democratic voters’ sense of optimism helps win an election.

Have we not been here before? I remember clearly watching Stephen Colbert dancing and  singing “Mr. Mueller is coming to town!” to the tune of “Santa Claus Is Coming To Town.” The implication was that the Mueller report would bring down Donald Trump. It didn’t. Neither did impeachment and neither will the recent exposure of his tax returns.

Unfortunately, there is no crystal ball to look into the future. In 2016, American statistician Nate Silver’s website, FiveThirtyEight, made it look like Hillary Clinton would win the Presidential election. When she lost, Silver told us that we didn’t understand statistics.

“I think people shouldn’t have been so surprised,” he said to the Harvard Gazette. “Clinton was the favorite, but the polls showed, in our view, particularly at the end, a highly competitive race in the Electoral College. We had him with a 30 percent chance, and that’s a pretty likely occurrence. Why did people think it was much less than that? I think there are a few things. One is that I don’t think people have a good intuitive sense for how to translate polls to probabilities.”

So that’s why we were wrong.

Right now, the polls are looking good for Joltin’ Joe Biden. It might behoove those not on board with President Trump to know of a political theory known as the Bradley effect.

In the 1980s, popular Los Angeles mayor Tom Bradley, who was the city’s first and only Black Mayor, ran for governor of California. The polls projected him as the likely winner. He lost.  When responding to polls, people said they were going to vote for Bradly even though they had no intention of doing so — they were embarrassed to say they weren’t. This is just a theory, but  it’s not hard to imagine someone saying they will vote for Biden when they will actually vote for Trump because where Trump is unpopular, he is really unpopular.

Roughly half of Americans don’t vote. They tend to vote for candidates whom they are excited about, and those who are excited about Trump are very excited. He is seen as a once in a lifetime candidate. In red state areas, the slogan is everywhere: “God, Guns, Trump.” They will definitely be going to the polls. The level of excitement isn’t quite the same for Biden and Harris.

Let’s not forget that history is written by whoever wins. It doesn’t matter who said it first, it’s true. Take for example the convictions in the Russian investigation that have been overturned because Bill Barr is running the United States Justice Department in a political manner.
It’s difficult in these days of political division to see the landscape for what it is. We live in our bubbles and sub-bubbles. This makes it easy for people to be manipulated by foreign governments and special interest groups. It’s easy to stay home and not vote because Bernie Sanders or Elizabeth Warren didn’t win the nomination, or not vote all because no matter how much you don’t like Trump, Biden just doesn’t do it for you.
Former Trump Security advisor H.R. McMaster says that “they [the Russians] had a whole disinformation campaign ready to go to say that the election was rigged” once Hillary Clinton was elected. You better believe they will do the same if Biden wins.

Biden needs to win big. If not, the election will be stolen by any number of factors — foreign disinformation campaigns, Proud Boys at the polls, the Supreme Court sans Ruth Bader Ginsburg, or Trump (recovered from COVID-19) refusing to step down.

This ain’t over yet. History has yet to be written.