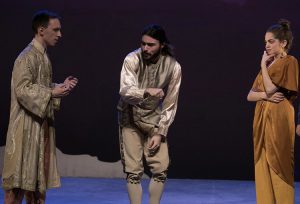 Over the summer, alumni and students of the Brooklyn College Dept. of Theater joined together across all concentrations to create what is now “The Brooklyn College Department of Theater Coalition.” For the past two months, the group worked tirelessly to create a list of student demands to be sent to faculty and staff. Most of the demands centered around the need for change within the department concerning proper representation and education for Black, Indigineous, and People of Color (BIPOC) students.

The final list of demands was sent out to faculty on Aug. 29 in the form of a 13 page document, including 14 articles pertaining to the entire department. The demands range from increased representation that is reflective of the student body, as well as student say on what productions are performed each semester.

“I wanted to join the team because each and every one of us obviously deserves to receive the education we’re paying for in a safe space where we’re treated with kindness, respect, and dignity,” said Jeremy Palimieri, a senior in the BA program and student representative. “Unfortunately that hasn’t been the experience for some of our peers 100% of the time,” he said. The coalition, which originally started out as a series of student led meetings over Zoom, has transformed into a form of student assembly with elections for representatives in each cohort. The elections are coming up next week.

Among the list of demands was the request for faculty reform with term limits for full-time faculty and as the document reads: “We demand that the faculty (full-time and adjunct), staff, and guest artists in the Theatre Department mirror the diversity of the Brooklyn College student population (70% BIPOC, 30% White) by August 2021.” Following the publishing of these demands, Helen Richardson, the newly appointed Artistic Director, stepped down from her position.

“I stepped down because I felt that it was essential for the Department to come together on certain issues vital to the Theater Department’s Season of Productions relating to Student Demands and just representation of BIPOC concerns before I could continue the work as Artistic Director,” Richardson told the Vanguard. Richardson added she believes the first step is for the department to undergo anti-racism and anti-bias workshops.

Along with Richardson’s response came reactions from the various chairs of each cohort within the department.

“Your thoroughness and passion are recognized by all of us and I assure you that we are reviewing the document, processing the changes that you have asked for and look forward to a dialogue to address them,”  said Kip March, the Chairperson of the Department.

Addressing the fact that “the revolution is here,” students and alumni are continuing their push for change with weekly Zoom meetings where they discuss their plans for working with the faculty to meet their needs. While receiving feedback from all chairs within the department, the coalition feels there still is work to be done.

“We’ve been thanked for our initiative and our passion, and many of the faculty members sign off their responses with ‘in solidarity,’ but we’ve yet to see the faculty take as much action as we feel they should have already in the time since the students first started reaching out to them at the beginning of the summer,” says Palmieri. “So we sometimes feel that these responses, albeit positive, are just words.”