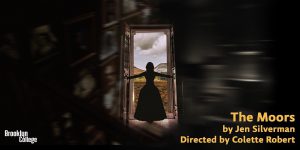 The Moors promotional image./ Dept. of Theater at Brooklyn College

Theater returned to Brooklyn College on Oct. 23 when the Department of Theater premiered The Moors for a limited five performance run. Shows at BC, however, look a bit different than usual this semester, delivered in an online format, with audiences able to view them on Vimeo each performance night.

The Moors marks the first production since campus closed in March, which was a devastating blow to the department. Despite the setback, the Department’s production staff was eager for the show to go on and spent months preparing to ensure that The Moors and other productions would happen. In a note from the Chair in the virtual playbill, Kip Marsh spoke of the hardships the department has faced since the shutdown.

“Our production staff and students spent the summer running a research laboratory experimenting and testing various technologies to allow for remote producing of live performances, and largely as a result of their efforts, we have been able to mount this production of The Moors as our first outing as a remote producing unit,” writes Marsh. “We couldn’t be prouder of what has been accomplished.”

Directed by Colette Robert, The Moors tells the story of two sisters and a dog as they “live out their lives on the bleak English moors, dreaming of love and power.” When an ill-fated governess and a moor-hen arrive, the two sisters and the dog head down a dangerous path that sets a dark comedic tone throughout the piece and explores themes of “love, desperation, and visibility.”

While there were many limitations to performing live theater in a virtual format, directors, actors and stage hands all made it possible to make the production feel as close to real time as possible.

The way the production pulled this off was all in the angles. For students studying acting and directing in live theater, changing focus to act and direct for the camera was a skill that quickly needed to be developed.

With the actors socially distanced and represented by individual boxes on the screen with a wallpaper-like background, The Moors understandably starts at a significant disadvantage. Scenes that would normally translate without much effort struggle to engage the audience and fail to paint a vivid picture of the setting.

Because of this, the first hour of the show is noticeably long, and time passes slowly during these scenes. The plot becomes stale early on, as a result, and the temptation for audiences to shut off their computers out of frustration emerges.

For those who manage to stick around for the second half of the show, however, the show grows significantly more exciting with action scenes and high-stake moments. The show’s dull first hour, however, lessens the impact of these scenes because it comes off as a sudden jump from one extreme to another, as opposed to a natural progression that can be tracked through character development or plotline domino effects that occur within the story.

None of these critiques, however, are to any fault of the actors, who each do their best given the circumstances. Two noteworthy performances are Estelle Lee as Huldey and Samantha Richardson as Emilie, who both shine in their roles despite their voices occasionally being drowned out by technical difficulties associated with the Zoom-like format of the performance.

There is one powerful scene that happens towards the end of the play in which Estelle Lee sings a powerful ballad where she reflects on a specific moment just prior. It is this moment in particular that really draws the audience into the performance as she sings: “Murder was the color like the heat of day. Murder was the gentleman you wish would stay. Murder is the orange dress you thought you couldn’t afford…”

This use of colorful imagery in the lyrics is capped off with generated applause at the song’s end whilst Lee breaks the fourth wall and speaks directly to the audience. Regardless, there is no doubt that this scene would have been met with a thunderous applause if performed in person. This, without a doubt, is the apex of the show.

There are a few moments throughout the show that have this potential, but it is primarily the Zoom-like format that prevents these scenes from having their desired impact. As a whole, virtual plays pale in comparison to the traditional theater setting, where focus can be more easily commanded from the audience, elaborate costumes and sets can shine, and the performers and audience can feed off of each other.

While the screen allows for the show to go on, it in many ways serves as a barrier that the show struggles to compensate for. But in some ways, this new form bred some innovation.

Throughout the performance, actors performed scenes written for characters in the same space and executed them with the use of props and using the frame of the Zoom screen in inventive manners. In some instances, actors crossed over the threshold of their screens to pour tea, share a book, or even kiss. 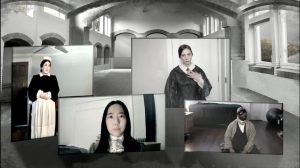 The cast of The Moors performing on Vimeo./ John Schilling

In an even larger way, The Moors leans into this new form and sometimes challenges the notion of how to present a scene from a stage play. At one point, the screen smoothly transitions to a forced first-person perspective where we, the audience, assume the place of a character who is being stabbed. As our assailant kills us, our blood can be seen spattering throughout the screen.

Because theater is such a powerful medium, it is understandable that anything that differs from tradition would pose a significant challenge or lack many of the qualities we look for when watching a play. More than anything, however, the Dept. of Theater at Brooklyn College deserves praise for their efforts in bringing back theater to the BC community.