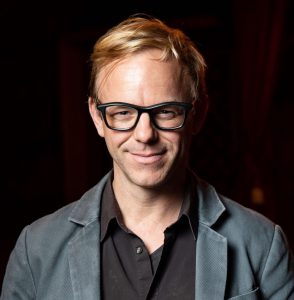 When COVID-19 hit New York City in March 2020, the Broadway Theater District was one of the first casualties of the new socially distanced world we now live in. Although, that didn’t stop the American Theatre Wing from announcing the nominations for the previously cancelled 74th Annual TONY Awards, with a Brooklyn College professor scoring two nominations.

Justin Townsend, an associate professor in the Department of Theater, was nominated for two TONYs in the category of Best Lighting Design of a Musical for his work on Jagged Little Pill and Moulin Rouge!. These nominations are the culmination of nearly a decade of Broadway experience as a lighting designer.

Besides Broadway, however, Townsend has been working in both lighting and set design since as early as 1996 in both Off-Broadway and Regional productions. Townsend, who received his MFA in Theatrical Design from the California Institute for the Arts and his BA in Theatre with a minor in Studio Art from the University of Massachusetts at Amherst, is currently teaching a total of 11 courses this semester at Brooklyn College across both the Bachelor’s and Master’s programs in the Dept. of Theater.

“Brooklyn College is extremely proud of Justin Townsend and his two TONY Award nominations,” Brooklyn College President Michelle J. Anderson told the Vanguard. “His work is world-class, and he routinely distinguishes himself in the performance world. We are lucky to have him giving our students real-world exposure and expertise in the arts.”

Townsend’s colleagues, Kip Marsh, the Department Chairperson, and Thomas Bullard, the Head of the MFA Directing Program, are both pleased to see Townsend’s work being recognized on such a grand scale.

“Having seen both productions it is clear to me that Justin’s work is well deserved to be nominated for a TONY award,” Marsh told the Vanguard. “Everyone in the department of theater is hoping that he is recognized for his outstanding work when the awards are announced.”

Bullard, who teaches Research Problems in Theater, Theater Practicum, and Special Problems with Townsend in the MFA Directing program, has witnessed Townsend’s dedication to both the craft and his students over the course of the semester. According to Marsh and Bullard, Townsend brings the same energy in the classroom that he puts into his professional work.

“I am privileged this semester to work alongside Justin as he teaches a brand new, highly innovative graduate course exploring the collaborative process between theater designers and directors,” Bullard told the Vanguard. “Justin brings the same innovative, idiosyncratic, thinking-outside-the-box approach to his teaching and mentoring as he does to his professional design creations.”

“Working with Justin in the Department of Theater is every bit as exciting and detailed as the work he puts on the stage,” Marsh added. “His thoughtfulness and inventiveness in teaching our students and as a colleague in the department in every way demonstrates his excellence as leader in his field.”

This praise of Townsend’s work is not exclusive to his colleagues but was echoed by critics throughout the 2019-2020 Broadway season.

Upon the opening of Moulin Rouge! in July 2019, Townsend’s work was one of the show’s highest praises, with Variety Magazine referring to it as “daring, supple lighting effects.” NJ.com also praised Townsend’s lighting design claiming it “manages to effectively translate some of the [Moulin Rouge] film’s more eccentric and whimsical moments.”

When Jagged Little Pill opened to mixed reviews in December 2019, the New York Times praised Townsend’s work as a redeeming quality of the show: “The show moves swiftly despite its heavy burdens, with Justin Townsend’s lighting (and the tireless dancers) doing much of the atmospheric work.”

Similarly, TheaterMania criticized the show for its “overuse of projections” but was quick to mention that “Justin Townsend’s lighting makes up for some of the loss of atmosphere here.”

These productions, however, are not the first time Townsend has been nominated for a TONY award. Townsend matched this feat in 2016 when he received another double nomination: one for Best Lighting Design of a Musical for American Psycho and the other for Best Lighting Design of a Play for The Humans. Townsend, who won a DramaDesk Award for each of these shows in 2016, did not win the TONY for either of them to much dismay.

“I’m happy about…Justin having a really great chance at finally winning the TONY he deserved for American Psycho,” said Connor (@thegangtexts) on Twitter.

Despite not winning in 2016, Townsend’s odds are better in 2020 as he is nominated twice in a single category that only includes himself, as well as Bruno Poet, who is nominated for “Tina — The Tina Turner Musical.” Townsend won the DramaDesk award for “Outstanding Lighting Design for a Musical” in June 2020 for his work on Moulin Rouge! with four other nominees in the category.

This win, along with the circumstances of the nominations and the news of it all, has energized members of the Brooklyn College community, who hope 2020 might finally be the year that Justin Townsend wins a TONY or at the very least, are just happy that someone from Brooklyn College is being recognized with a high honor.

“Justin Townsend for the win!!,” said Andrea Lynn (@andrea_lynn_art) on Twitter. “I’ve only ever had two professors really support me on my endeavors outside of theatre and he has always been one of them.”

“Justin Townsend is a brilliant and innovative theater artist and professor. His theater department colleagues and I are thrilled,” Bullard added.

Prof. Townsend did not reply to the Vanguard’s request for comment in time for printing, but his passion is echoed in his 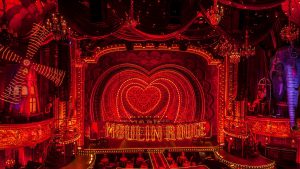 online bio in which he identifies himself as “an associate professor at Brooklyn College dedicated to affordable theatrical education and training,” along with his many accomplishments and accolades.

← Newer Post
BC’s Curtain Rises Again Virtually with “The Moors” Does it Work?
Older Post →
A Look Into TREM’s Award Winning Show “All in Favor”