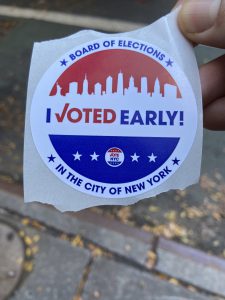 The sticker you get after you vote. / Allison Rapp

I have always voted two blocks away from my apartment without trouble. However, this year was the first time that New York State has allowed early voting in a Presidential election. It’s one of those weird political trends that red states have actually been considerably more progressive in; Georgia has had early voting since 2008.

I had asked for a mail-in ballot the day Governor Cuomo announced we could do so this summer, and I never received it. This was likely a problem due to the incompetence at the New York Board of Elections, which has been reported on by the New York Post and the New York Times.

There has been so much mishigas surrounding mail-in voting that I decided just to do it in person. After the original wave, New York has seen low covid numbers and has consistently posted the third lowest infection rate in the county. With much less COVID out there, in person voting seemed worth it.
Day One: It was the first day of early voting. I went to my early voting site on Saturday, Oct. 24. The line snaked around two blocks as far as I could see and it felt chaotic.

Day Two: I tried again on Monday, Oct. 26.  I thought that since it was a weekday, people would be at work. The line shouldn’t be that bad. It was. The line went around four blocks. The poll worker said the line would take two to three hours. That didn’t work for me either.

Day Three: I didn’t try to vote this day, but I saw the line for my early voting site was documented on TMZ. From the pictures, it looked like the line went around seven blocks or more.

Day Four: On Friday Oct. 30,  the early polling location was set to open at 7 a.m. If I just set my alarm for 6:30 a.m., I should have been able to get up, get ready, and vote. It didn’t happen.  I am not a morning person. However, that night during my Zoom Shul, the Rabbi mentioned that lines have gone down.

Day Five: I didn’t have work and I didn’t have school. I packed my Machine Learning textbook and my massive Bluetooth headphones so that I could watch YouTube videos in line.  I was ready to stand for hours in line to vote.

When I got there the line took less than ten minutes. (Lines at Bread’s Bakery and the Apple store were longer.) I voted and was out the door less than three minutes after that.

My guess is that it probably would have been just fine to have waited until election day. Some might argue — why go through so much trouble? You live in New York, the candidates don’t even bother to campaign here.  Their argument continues by making this point: with the electoral college system, margins in voting numbers don’t matter, only electoral votes do.

I am always surprised how many people have this opinion. I take the counter argument that if  individual votes didn’t matter, then why has there been such powerful opposition to suppress the vote?

As Paul Weyrich, cofounder of the Heritage Society, a conservative group, said in 1980:  “I don’t want everybody to vote. Elections are not won by a majority of the people. They never have been from the beginning of our country and they are not now. As a matter of fact, our leverage in the elections quite candidly goes up as the voting populace goes down.”
Just to be absolutely clear there has been no evidence of voter fraud.  The Trump appointed Director of the FBI, Christopher Wray, said so. 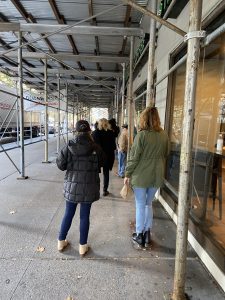 A line outside for voting. / Allison Rapp

Nevertheless, this myth is being wrongly circulated in mainstream media outlets like Fox News, and on social media. So, there might be voter intimidation on election day.

Furthermore, there is the threat of Election Day violence. Businesses have begun boarding up to protect themselves. There are reasons to vote early that come out of a world of worry.
By the time this article is released, the presidential election results might not yet be known.  Still, the president may declare victory in the hopes that, following the Bush v. Gore playbook, the supreme court will declare him president — ignoring the proper election results.
Even though there may be trouble following election day, things seem okay now. Vote.