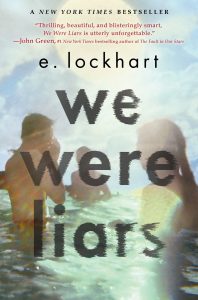 “Shut up…I’ll give you more chocolate if you shut up.” The reader is explicitly told to not ask questions. If you can just go with it, then maybe they’ll let you in. No promises. We Were Liars by E. Lockhart asks the question: if you really hated your family — extended family too — would you burn them all down?

Cady is our narrator, but maybe not a protagonist. She spends her summers on her family’s private island off of Martha’s Vineyard.  Alongside two cousins and one family friend, they call themselves “the liars.” They live in their own world separated from the adults and younger cousins — like how it is to be a teenager in every multigenerational setting all over the world, except each of these families has their own beach house on their private island.

As pretentious as this set up may sound, it feels authentic. An old friend of mine who went to Greenwich Country Day School before he prep’d in Virginia, used to tell me when we walked about the city: “They’re doing it wrong.” He was referring to when, say, a guy would wear Nantucket red short , a golf shirt, and boat shoes without socks. They were trying to dress the part of a culture they knew nothing about, but so desperately wanted the world to see them as being a part of.

Instead, We Were Liars seems to almost be a case study of a rich family where the children are dependent on “the family money.”  The author makes a convincing argument that when your family pays your rent, your family is your job. When you have no real accomplishments of your own, at least none that justify your level of comfort, your sense of self-worth is predicated on your family myth. It is this house of cards that Cady wants to set a blaze.

There are a few things that really don’t work. First, this book came out in 2014. It’s set in the present day. The main characters are all teenagers born of the generation where every child leaving the hospital came with a free IPod.  Nowhere in this book does technology punctuate the lives of the characters as it would even in 2014. Another misstep is that one of the characters is supposed to be of Indian heritage. This character reads so inauthentic, it makes one wonder if the author has ever met an Indian before. This is a pity, because there is an astute lamentation about racism, which could have been more impactful had the author ascribed more features to this character besides having black skin and eating curry. Lastly, it relies on the plot device of someone slowly recovering from amnesia, which feels like a Hulu original movie or a story that opens unironically with: “It was a dark and stormy night.”

All things being equal, the book is still a fun read. This is a plot-driven book and not a character-driven one. The slow unraveling of the mystery keeps the reader going, and witty pithy dialogue keeps it fun. Each character is an archetype of New England’s old money culture, so there isn’t much character development to speak of.  You automatically know who everyone is and that doesn’t change much. The focus is to figure out what happened.
Towards the end of the book the reader is given an “F-you” — what the reader thinks has happened in the story hasn’t happened at all. This makes for a very satisfying ending.

I never understood what was meant by a summer beach read before I read this. It is gripping and not vapid, but not too enriching either. For those who have read A Separate Peace by John Knowles, you might recognize the structure but you will not get the insights into the human condition. This book straddles the genres of realistic YA fiction and psychological thriller.
There seems to be an endless song of praise for this book. It was named best book of the year by NPR, Time, The Wall Street Journal, and The Boston Globe, and stellar reviews litter the internet. I am not sure I’d go that far but as is written in We Were Liars, it is nothing “that a Percocet and a couple of slugs of vodka doesn’t cure.”