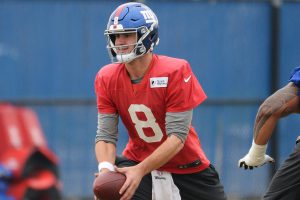 Through more than simply donning the red, white, and blue uniform, Daniel Jones best captures the spirit of the New York Giants in that he shows flashes of brilliance, but ultimately squanders wonderful opportunities.

No one will mistake Jones for an elite quarterback in this, his second year. And most, beyond possibly Giants GM Dave Gettleman and the Giants faithful, won’t mistake him for ever being one. But he does show potential to be a great player and leader, which must hurt most for Giants fans when they see the team then fail.

Jones was drafted sixth overall by the New York Giants in 2019. Since then, in games Jones has started, the Giants are standing at an appalling 5-16.

When Jones was announced as the Giants first pick of the draft, most were flummoxed. Even if Jones was the Giants’ guy (which it seemed clear he was given his connections to the Manning family), it seemed pretty clear that he would still be on the board at number 17 or 30, the Giants’ next two picks.

But draft choices are not an exact science, and players are meant to prove the naysayers wrong. Jones had an opportunity to learn under Giants legend Eli Manning, and then get the keys handed to him when he was ready.

Jones can look extremely adept at maneuvering within the pocket, using his legs to gain yardage, firing to open receivers and moving the ball upfield. He can also look like a deer in headlights who gives the Giants little chance to put points on the board. This enigma is frustrating for Giants faithful, and casts aspersions on Gettleman’s decision-making, which many people have been complaining about for years, dating back to his time with the Carolina Panthers.

Look no further for the highs and lows of Jones than two weeks ago when the Giants lost a nail-biter to the Tampa Bay Buccaneers, 23-25. The Giants led at the half, 14-6, but were down eight as the clock dwindled at the end of the fourth quarter. Jones then led the Giants down the field with enough powerful momentum to manifest a touchdown against a formidable Buccaneers defense. All that was left was a two-point conversion to tie and extend the game.

Jones caught the snap, shifted his feet and hips to the side, and fired to his receiver in the endzone. However, the ball was broken up by a Bucs defender’s hand, and pass interference wasn’t called on the play. Upon replay, it was clear Jones should have thrown the ball earlier and further to the right so that it wasn’t slightly behind his receiver, and with more velocity. The Giants’ hopes were raised by Jones getting them down the field and within one conversion of tying the game, just to be crushed by a minor mistake.

In 13 games (12 starting) last year in his rookie season, Jones averaged a 61.9 completion percentage, 24 total touchdowns and 12 total interceptions. Comparatively, this year, across 9 games, he is averaging a completion percentage of 62.4%, has 8 total touchdowns and 9 total interceptions. The Giants are 2-7, with their only two wins coming against the similarly-putrid Washington Football Team.

Jones feels like he can be a starting quarterback for a playoff team. We watched Nick Foles defeat Tom Brady in the Super Bowl a few years back, so really anything is possible. But is Jones the type of player that can actually lead a team to success? Can he be the best player on the offensive side of the ball and make the big plays when it counts? That remains to be seen, but most of the numbers point to a disappointing answer.

Daniel Jones could become the savior of the Giants next year with more experience under his belt. With talent around him, he blooms into the player the most optimistic Giants fans believe he can be. But he could be just another castoff, adrift in the wind, forgotten in the history books except when general managers study when not to reach for a player in the draft.