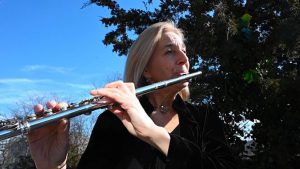 It was “Flute Friday” at Brooklyn College on Nov. 13, as the Conservatory of Music at Brooklyn College hosted a trio of events throughout the day all having to do with Burkart flutes, including a digital factory tour, as well as a masterclass and a recital via Zoom with Carol Wincenc, a Burkart artist.

Carol Wincenc, a Grammy-nominated international flutist and professor at the Juilliard School and Stony Brook University, joined Brooklyn College students for a Friday night Zoom recital titled “Carol Wincenc and Friends!” This however was not your typical recital.

Instead of performing live, the recital consisted of Wincenc sharing video clips of some of her past performances and leading a discussion about the music and why she selected the pieces she did for the evening screening.

The recital began with Wincenc performing Sato Matsui’s “The Goldenrod Sonata,” a soothing piece that is reminiscent of nature.

Throughout the piece, Wincenc can be seen swaying as she lets the music flow through her. As a flutist, Wincenc’s expertise becomes especially evident as the piece slows and speeds back up throughout with seamless finger movement and expert precision.

An accompanying piano compliments Wincenc’s flute, but eventually ceases at the piece’s end, allowing Wincenc to play alone with a heartbeat-like sound that builds tension and ends the piece on a high note.

The recital then turned to Wincenc’s rendition of Valerie Coleman’s “Amazonia,” a longer piece that utilizes different movements and changing dynamics for emphasis.

The piece begins with the piano playing faintly in the background, allowing the flute to shine more prominently than in the previous performance. This quickly changes, however, as the dynamics constantly shift from low to high and back again.

Piano solos emerge throughout to carry the piece from one section to another, establishing a theme of constant back and forth between the piano and the flute as they equally vye for the limelight.

Following this piece, Wincenc played a clip of her performance of Germaine’s Tailleferre’s “Pastorale,” a smooth departure from the constant shifts and aggressive dynamics of the preceding pieces.

“Pastorale” includes not only Wincenc on the flute but another performer on the harp, and the two of them work together to make the most of the shorter piece. Unlike the pieces played before, this one takes a calmer approach in both sound and technique, as the flute carries the piece with a soft tone, and Wincenc remains seated and relatively static throughout.

This tranquility does not last, however, as the recital transitions to Wincenc’s performance of Amanda Meier’s “Sonata in B Minor,” a piece that highlights the flute almost as a voice being backed up by the piano.

Similar to “Pastorale,” Wincenc and the pianist bounce off of each other throughout, often utilizing repetition in a call and response-like fashion for dramatic effect. When played alone, the piano sounds melancholic, but when the flute chimes in, the piece brightens.

These elements work in tandem with a range of speed patterns throughout the piece as it builds up and slows, consistently evoking a sense of alertness within the listener to create a significant theme of high tension and present a wide range of techniques.

As the recital came to a close, Wincenc decided to end with “The Goldfinch,” a piece composed by Antonio Vivaldi, a composer who was notably kind to young orphaned girls and often encouraged them to play instruments.

“The Goldfinch,” like Meier’s sonata, establishes the flute as a voice, but it takes a different approach. As made clear in the title, the flute resembles the sound of a singing bird.

In the video, Wincenc can be seen with three violinists and two cellists in an outdoor setting that really sets the mood of the piece. This performance was recorded in the spring when COVID-19 had eliminated indoor events entirely.

Broken into three significant sections, Wincenc’s flute provides the sound of the singing bird, and actual birds can be heard in the video seemingly responding to the music. As the piece continues, the string players work together to transition between Wincenc’s bird sounds.

By the time the piece reaches the allegro, the piece seemingly creates an image of a bird flying  through the sky with its diverse instrumentation. Wincenc’s flute stands in for the sounds a bird would make and the string players create a sense of movement with a fast, triumphant tone that compensates what we cannot see with a vivid soundscape by creating tension that is relieved by the piece’s end.

Before the recital ended, Wincenc offered advice to musicians in attendance about her pre-show rituals, including the mental and physical preparation that goes into a performance. For Wincenc, this often includes practicing in front of audiences both real and stuffed.

“I very strongly believe in visualization so when I am preparing for a concert…I play it every  single day for at least a couple of weeks in front of people,” explained Wincenc. “I [would] grab my son’s 40 Beanie Babies, and I would set them all up and…walk out as if this was Carnegie Hall in front of the Beanie Babies, take my bow, and play the entire concerto.”

Other rituals for Wincenc include not eating, taking a nap, going for a power walk, and even refraining from swimming and kissing. When it comes to nerves, Wincenc has resorted to homeopathy, meditation, and even beta blockers to help her breathe. Despite the taboos surrounding medicinal approaches, Wincenc emphasized the importance of doing whatever works for you.

“Stepping out in front of 3000 people is not a natural, daily act,” said Wincenc. “I think it’s deeply personal and never feel apologetic for whatever it is that it takes for you to feel absolutely in your ‘A’ game when you walk out on stage.”