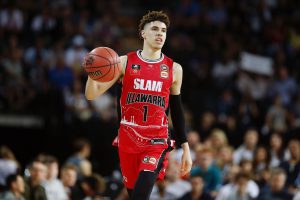 The NBA Draft tips off Wednesday night at 7:30 pm EST on ESPN. With it comes a flurry of questions, decisions, and intrigue. It is a draft considered by most as weak at the top, but strong in depth.

The Minnesota Timberwolves command the first overall pick, but in a year without a consensus number one pick (such as a Zion Williamson or Anthony Davis), questions remain about what they will decide to do.

With two stars already on their squad in Karl-Anthony Towns and D’Angelo Russell, the Wolves may be more inclined to choose for fit than normal teams selecting at number one would. Do they want to go the route of LaMelo Ball, a talented playmaking guard with possibly the highest ceiling of anyone in the draft, or maybe decide on Anthony Edwards, a wing with extreme athleticism, but questions about his work ethic? Questions that also surround Ball.

Standing right behind the Timberwolves are the Golden State Warriors, a team with legitimate championship aspirations. It is rare that a team with such starpower (and bonafide winners) picks so high up in the draft, but past instances of this show us that the team can regroup and prolong, or forge a dynasty (the mid-80’s Lakers with James Worthy, late 90’s Spurs with Tim Duncan).

The Warriors have shopped their pick (much like the Wolves have), to try and move down in the draft and in the process acquire a veteran who can help them win now. However, no moves have been made yet, and lacking a starting-level center right now, the Warriors may find that selecting James Wiseman, the 7-foot, one big man out of Memphis, is their best bet.

After the Warriors comes the Charlotte Hornets, who reportedly are high on Wiseman themselves, also needing a center. But the Hornets, without a star on their roster, would be smart to choose the best talent available, even if that means choosing Ball or Edwards.

Following the Hornets selection comes a plethora of teams at the bottom of the East in interesting positions. The Bulls, Cavaliers, Hawks, Pistons, Knicks, and Wizards choose next, and will have a bevy of choices that can help accelerate their respective rebuilds. Deni Avdija, Obi Toppin, Tyrese Haliburton, Killian Hayes, Onyeka Okongwu, and Patrick Williams are among the names being considered for these 4-9 slots.

Avdija and Toppin are two extreme talents, the first being an international prospect with useful versatility, and the latter being a powering force at the two big man positions, who can shoot, pass, and was the recipient of the 2020 John R. Wooden Award, given to the most outstanding college basketball player in the country.

As in every draft year, trades will be made that will shake up the entire draft order and our preconceptions as to what team will pick whom. Teams in more concrete positions (such as the Warriors and Wizards with John Wall returning) will prefer a player that can help them win now. Teams with a star on the roster and playoff aspirations, but having failed in recent years (such as the Wolves and Hawks with Trae Young) may find themselves better suited to nab a player that fits their core (like a wing for the Wolves and a lockdown wing defender for the Hawks). And for the teams bereft of a star, with questions circulating as to what direction they are even taking (like the Knicks and Pistons), picking a player with extreme upside is probably the best bet (there has been chatter around both teams trading up to take LaMelo Ball).

With an NBA season approaching that will be unlike any before it, draftees will have the shortest training camp in recent memory, and teams, facing financial restrictions, may approach their draft decisions completely differently than before. No one knows who will be drafted in the top 10, what team will win the day, or who the best player in the draft will turn out to be. It may be the first overall pick. Or it may be the 15th pick in the second round.

One thing is for sure: many teams desperately need to get this draft right. Fail, and they will fall deeper into NBA obscurity and set their rebuilds back for years to come.