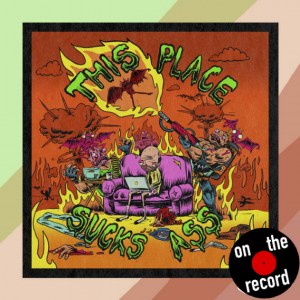 In the days of yore, also known as February, I bugged Allison about doing my own guest stint on On The Record, a column I’ve enjoyed editing and reading for a while now. I thought it’d be a celebratory column when I first pitched it. Of late though, her anthropologic rock music odyssey has unearthed almost as many dinosaurs as it has yielded moments of discovery, reflection and growth, something I’ve felt in dire need of. Practically numb to the call of music for months now, I’ve only really listened at my lowest moments, turning music into a balm for my existential dread. In those moments, I’ve often turned to something more sensitive or downbeat to sooth me. Music to cater a healing aura, I guess. But the myth that reflection is exclusively this quiet and deeply contemplative process is bullshit, so much so I gagged even typing out that last sentence.

So last Saturday, I did myself a favor and kept it real with myself. I tuned my TV to Spotify and threw myself a concert. I built myself a fictional occasion. Canadian punk heartthrobs PUP had just released their latest EP, appropriately titled This Place Sucks Ass and their tour had brought them back to New York. The music blasting, I shamelessly did that same bounce you’ve seen every dude in a mosh pit do before he starts swinging, and flew across the room. I’ve got very little left to lose, so what’s a hole in the wall?

The EP, a collection consisting of a new song, cover, and cuts that didn’t make it onto PUP’s excellent 2019 album Morbid Stuff, is decidedly of two worlds. On one hand, it’s filled with the same anger and despair that has marked the band’s existing efforts. In that sense, I can’t help but be pulled backward to a simpler year, when I was listening to them on my long commute to and from campus every day.On the other hand, the frustration expressed on the project feels of the last few months. Stefan Babcock, lead singer of the band, barks about decay and loneliness that feels like it could only be molded in our current situation.

“And I was rotting in the backseat, I was trying to find new words for the same repeating lines.”

Across This Place Sucks Ass, a title I won’t soon get tired of, there’s a tangible effort on part of the lyricism to reconcile with these oh so common issues. A sense of recollection or at least a concerted effort trying to pick oneself back up tinges the EP. Babcock’s tired, yet angry, vocals on “Floodgates” deliver the above lines, an image of someone withered from trying to make sense of the same problems that have plagued them and will continue to on a ride they don’t even necessarily have control of. Same man, same.

Babcock seems to know just like me that life’s beyond our control. Try as we might to guide it, it will ultimately do its own thing, clearly independent of us. Never has that been more painfully obvious than presently. It really has been a magically bad year. And that’s something I’ve kind of been sitting on for a long time now. It makes no sense how bad the state of everything is so why am I fighting it so much? As a matter of fact, whereas it may have been independent of me till recently, fighting the turns life takes has only made it contentious. I’m now in a boxing match with the cosmos and it’s looking like they’ve got my number.

On the bridge of the only technically new track and opening banger, “Rot,” Babcock assuredly asserts, “The less I care about everything, the better it goes / And the better it gets, the more I lose control” with the confidence of a man who’s now on the other side of that pounding. If the things I’m doing are turning out paradoxical results, then why do anything at all? I’m only hurting myself and the state of things further deteriorates. So I’m taking steps back and in the immortal words of Twitter memes, hoping that “nature’s healing.”

“And even if the wait is long, and all the words are wrong / Put the recorder on and I’ll begin again.”

PUP’s so right, this place does suck ass. This house playing unwitting hostage-taker sucks ass. This state of mind where I’m victim to seemingly unending exhaustion and lashes sucks ass. This pandemic sucks ass. Look out the window and point me towards something that doesn’t.

Acknowledging this all has been the most liberating thought in months though because it’s at least drilled home that this is just a place. Not the one you necessarily make plans to go to, mind you. It’s more like the crappy out of the way town in the boonies your car breaks down in during your road trip. There’s tons more places to travel to, both metaphorical and not. I’m not sure how long it is till I, or we, get there but it’s certainly coming.

At the end of the concert that never was, I was exhausted and yet oddly hopeful. I was never one who needed the violence of a mosh pit, but estranged from my former life, for the first time I did. The world’s problems and my own didn’t stop being real tangible things haunting us, but I’d taken back control of my life from them for 17 minutes and it felt great. So long as that feeling exists, I’m going to keep trying to get to it. To some place that doesn’t suck ass.