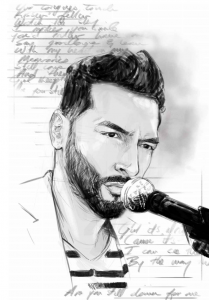 The cover of “Jon B, Are You Still Down?” by BC alumna Dominique Carson./ Amazon

If you lived in the 90s, tuning into BET music shows or hanging out at your local CD store were most likely part of your routine. For Brooklyn College alumna Dominique Carson, growing up in the decade with “real R&B” led her to find inimitable soundtracks that bring her back to childhood memories. In her book Jon B: Are You Still Down?, Carson delves into the story of Jonathan David Buck, one of the soulful artists who made her the adamant 90s music lover she is today.

“If there’s no heart, there’s no originality, and there’s no transparency, then to me, it’s not R&B,” Carson told the Vanguard. “If you have lyrics that can touch people – I don’t care if you talk about love, breaking up, inspirational- if you have the lyrics that people can have for a lifetime, then you’ve done your job.”

As a music journalist, and massage therapist, Carson’s versatility has become second-nature to her. During her time at Brooklyn College, Carson was at the forefront of any opportunity that came her way, including interviewing BC alum Floyd William Carter, Sr, an original Tuskegee airman who was a military pilot during WW2, her senior year.

“One thing I took away from Brooklyn College is how to think, and how to expand my thinking critically from a personal note, from a professional note,” Carson said. Eventually, her hard work paid off and landed her BC’s Hall of Fame award, making her the first African-American recipient.

Raised in East New York, with a family who listened to music day and night, her upbringing was surrounded by numerous tunes, including “You Make Me Wanna…” by Usher. For Carson, the nostalgic track reminds her of her second-grade talent show, where the boys in her class performed the song and the girls sang “Put a Little Love in Your Heart.”

“After the guys performed they went around to the girls they liked, and the guy that liked me gave me a kiss on my cheek, and said to me, ‘This is a song I’m performing for you because I know you like Usher and I know you like You Make Me Wanna…’.”

For Carson, these songs encapsulated a listener’s memories, which was an experience left behind in the 90s. By the time she was five years old, Carson was immersed in the R&B world and was introduced to Jon B and his “alluring voice.” Albums like “Bonafide” made young Carson dance to the beat, remaining unaware of some of Jon B’s explicit lyrics. Decades later, as she listened back to his music for her book, Carson used her journalistic lens and admired more of his work than she ever did before.

The book is Carson’s first publication, but she’s written another about the same artist in the past. However, due to copyright issues with Jon B’s lyrics in her writing, her first work’s release date has not been decided. Nonetheless, as she embarked on writing Jon B: Are You Still Down?, Carson aimed to see through her goal of becoming an author of two books before turning 30. Tapping into her journalistic motto of “accuracy, brevity, and clarity,” which she picked up during her time at BC, Carson followed the advice of a former LA Times reporter who told her a book is just like an in-depth investigative piece.

“I was on my Shelby Woo, Carmen Sandiego, with my magnifying glass looking at different people he collaborated with,” Carson said with a chuckle. “Because you have to ask yourself, ‘Why is Jon B special?’”

Back in the 90s, the music industry was less receptive than today, which led Jon B to face “racial barriers and roadblocks from the music industry” for being White, Carson explained in her book. Being that R&B was a predominantly African-American music scene, many were hesitant about his ability to produce songs that were true to the style.