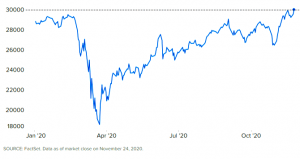 Last week, the Dow Jones industrial average broke 30,000 points for the first time in history.  We here at the Brooklyn College Vanguard, took notice. The reclusive President Donald Trump gave his first press conference since losing the election to speak for one minute about the “sacred” number. Using the term “sacred” gave a religious overtone, as if a data center in New Jersey is tantamount to Mount Sinai. After extensive study of the Torah, Koran, and the King James Bible, I could not find any mention of the stock market being an instrument of the divine. But is the stock market a valid measure of the U.S. Economy?

My first memory of hearing about the stock market is the crash of 1929, which set off the Great Depression. On Oct. 29, 1929, the Dow Jones industrial average lost 11 percent of its value. This was known as “Black Monday,” because the Dow Jones fell just over 30 points. An economic study of the Great Depression is enough for a Ph.D — in fact erstwhile Federal Chairman Ben Bernanke did just that —but the point is that if the Dow goes down by too much, men will jump out of windows and the country can go into financial ruin for 10+ years. By contrast, if the Dow goes up by a lot, then the country is prospering. This index of the 30 largest companies is some magical metric that gives us a timestamp of how the country is doing at any given microsecond. However, even if this was true at some point in the past, is it still true today?

One could counter-argue that the COVID-19 pandemic and the accompanying shutdowns were the sources of this high unemployment because the previous employment number (at the start of March 2020) was 4.4 percent — a continuation of the steady declining employment curve since the subprime mortgage crisis in the late 2000s.  Without loss of generality, the United States is spiking again with COVID-19 just as bad as it was in the spring — except this time across the entire country, and many states are shutting down again. So, as COVID-19 spikes, so will unemployment numbers.

Maybe another indicator is the U.S. food banks. According to Feeding America, food banks have distributed 4.2 billion meals since March and the number of Americans facing food insecurity is 50.4 million.

However, there are vaccines coming out and this has triggered the stock market to rise. Vaccines give us hope that we will get out of this nightmare. There is light at the end of the tunnel. It’s a cute explanation.

The truth of the matter is that stock values as a whole are a function of monetary policy (i.e. the money supply) and not the state of the U.S. economy. The United States still owes $23.3 trillion, and Donald Trump has increased that by 36 percent. As CUNY professor Paul Krugman says, these debts don’t matter as much when the debt is in your own currency. In fact, we can add to that. The lower the dollar, the more pressure there is to buy stocks and, in turn, the stock market goes up. A strong dollar means lower equity prices and a weak dollar means high stock prices.

Keep that in mind. The Federal Reserve‘s response to COVID has been to cut the interest to 0 percent. This pushes stocks higher. This was announced on Mar. 15, 2020. Then the Fed flooded the market with cash by Quantitative Easing (QE) — printing money. Then the Fed further opened its discount window, which is basically asking large financial institutions to play the stock market. The list keeps going and going.

In summary, the Fed used everything it had to create a bull market not based on the state of the US economy, but instead on monetary policy. It was the right thing to do. Nevertheless, the Fed policy has been getting more aggressive over the last 30 years and that has led to the decoupling of the Dow Jones industrial average and the real US economy.

← Newer Post
On the Record: Mike Garson, BC Alum and Keyboardist for David Bowie
Older Post →
The Knicks Had a Smart Off-Season…Wait…What?