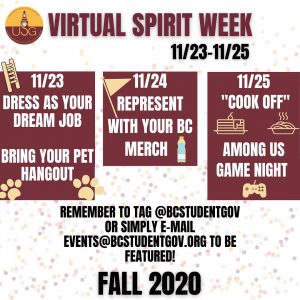 BC USG hosted Spirit Week from Nov. 23rd to 25th./ @bcstudentgov on Instagram

Last week, the Brooklyn College Undergraduate Student Government hosted its shortened Spirit Week celebration just before the holidays. Taking place from Nov. 23 through Nov. 25, USG held a series of events and activities to demonstrate school spirit the only way they could: digitally.

“Since we’re all online, we weren’t able to conduct Spirit Week the way we would have liked to in person,” said Emily Beregovich, Deputy Press Director of USG. The activities that took place over Spirit Week included photo challenges encouraging students to dress for their dream job, showing off BC merchandise, and a “cook off” which prompted them to show off their favorite food they had made. These challenges unfortunately saw a muted response this time around.

“We didn’t have much of the picture taking, you know, that we like normally like to try and get [people] to do,” said USG president Ethan Milich.

Besides these challenges, there were also two opportunities to hang out in the BC Lounge Discord server, a forum made earlier this year for students to convene in while quarantine persists. By comparison, these activities fared better.

First on the 23rd, people were encouraged to bring their pets and show them off on a Discord call. Milich shared that there were a “handful” of students there showing off their pets in good-natured fun.

“It’s always good company. You just see your fellow college students and interact with them where you like, whereas like nowadays we don’t interact with them at all, other than in the classroom setting, which isn’t very social,” Milich said.

To cap the week’s events off, on the 25th everyone was encouraged to drop in and play Among Us. Among Us, a two-year old party game similar to Werewolf, blew up in popularity over the summer and has become a fixture of online gatherings amidst the pandemic.

During Among Us, Milich says there were about thirty people playing and that the game night “fostered that student spirit and that school spirit that we hoped for.”

Despite these well-intentioned plans and the fun that was had, multiple obstacles seemed to have impacted attendance and participation.

“This was a mini, virtual Spirit Week that took place the three days leading up to Thanksgiving weekend. Not too many people participated, but those who did showed some BC spirit during an unprecedented time,” Beregovich stated.

USG is already hoping to learn from this year and take it into next semester.

“We definitely want to make it five days,” Milich said, highlighting the fact that the shortened run may have contributed.

USG also seemed to struggle to get word out about the truncated spirit week, barely being able to promote it before the week came to pass. As well as heavier, timely promotion among the “Brooklyn College community” in the future, Milich wants to amend for the relatively small engagement this spirit week saw by bringing other groups into the fold.

“We want to collaborate with other groups and clubs to make it as popular and known as possible, including possibly SAIL[Student Activities, Involvement and Leadership] itself,” he said.

Milich claims to see this mini spirit week as an experiment that panned out. While he and USG are well aware of the shortcomings that led to a reduced turnout, they seem to already be thinking of how to expand on what they had come spring.

“We’re gonna make sure it works. It’s gonna be great. That’s why like, yeah, even though it wasn’t as good as we wanted it this time, of course, it was very promising and I cannot wait for next semester’s spirit week.”

Moises Taveras is the Features Editor at the Vanguard. When he's not doing that, he's playing video games or spending far too much time on Twitter.
View all posts by Moises Taveras →
← Newer Post
USS Unanimously Calls to Continue Credit/No Credit, Now Goes to Board
Older Post →
Hillel Brings Thanksgiving to Those in Need, Along With a Bit of Normalcy