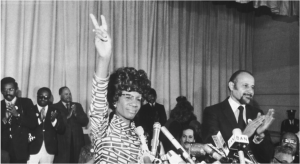 Back in 1968, the country witnessed Brooklynite and Brooklyn College alumna Shirley Chisholm take her seat in the US House of Congress, showing what it meant to be “unbought and unbossed.” On top of being the first Black Congresswoman and the first Black person to run for president, many remember her historic efforts in the ongoing struggle for freedom. To commemorate her legacy, the Shirley Chisholm Project at BC hosted a dialogue on Black women’s political leadership with Maya Wiley, a civil rights attorney running for mayor of New York City.

“In this political moment, the preservation and maintenance of Shirley Chisholm are needed more than ever before to ensure that a generation would never forget how one Black woman dared to be the catalyst for change,” said Dr. Zinga A. Fraser, Director of the Chisholm Project.

For the last 14 years, the organization has hosted Shirley Chisholm Day on Nov. 30, the late Congresswoman’s birthday, to “interconnect the past with the present” and discuss how her legislation has extended to today. With the rise of grassroots candidates of color running for public office and the recent election of Kamala Harris as Vice President, Chisholm’s spirit has seeped into present American politics. For her fellow CUNY community, her implementation of programs like SEEK continues to live on by providing low-income students with financial backing to pursue their degrees.

“This was a woman of thin, small stature with very broad shoulders that we stand on because she fought. She didn’t back down,” said mayoral candidate Wiley. “That takes and shows our true and authentic selves to each other, and showing what it means to be a Black woman – which is to feel, which is to confront, but it’s also about to unite and have compassion,” said Wiley. As mayor, she aims to continue addressing issues like excessive force by police and the digital divide that affect New Yorkers.

Throughout the event, Fraser and Wiley discussed topics pertinent to Chisholm’s advocacy, from education to gentrification. As a professor herself, Wiley spoke about the school to prison pipeline that has shown the lack of investment that’s been made towards the youth of New York. Rather than penalizing children for committing mistakes like lashing out, the speakers emphasized that support is a more effective means of resolving conflicts.

Relative to CUNY, the austerity cuts and the technology gap amongst students were issues that existed well before the pandemic, says Wiley. Subsequently, this has led many in public office to ignore the university for what it is – the pipeline from college to career.

“It starts with seeing our children as our greatest resources and our greatest investment,” Wiley said. “And that means asking the city, the state, and the federal government, and all our people to make that investment and see as in our shared, collective interest.”

Before her mayoral run, Wiley served as the board chair for the NYC Civilian Complaint Review Board. There, she received numerous cases of police sexually molesting women during stop-and-frisk practices. In addressing these incidents of police overstepping their boundaries with New Yorkers, Wiley intends to dismantle the “gray areas” that do not clearly indicate what an officer can or cannot do.

“And what we need is to feed the community-based organizations that are interrupting violence every day, but also, who are able to provide the services and support that prevent it,” said Wiley. “That means right-sizing the police department and investing in our dollars wisely in our communities.”

In reflecting on life after Chisholm, the conversation closed out with one of the most significant changes that her native Brooklyn has undergone: gentrification. As hikes in rent push out locals, today’s leaders are called on to address the costly modifications through legislation – possibly considering increasing minimum wage as Chisholm did during her 14-year-long term in Congress. 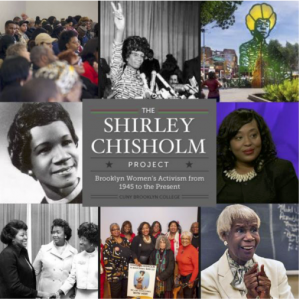 “If Chisholm were to walk through Brooklyn today, it would be unrecognizable to her. The center of that change is the displacement of so many Brooklynites and New Yorkers from their homes and their communities because of gentrification at a larger scale,” said Fraser.

As more leaders of color exchange protests for politics, Fraser reminded participants that Chisholm was the one who paved their way into politics. Despite the challenges she faced as many initially doubted her ability to be a woman in legislative power, Chisholm continued living up to her saying, “If they don’t give you a seat at the table, bring a folding chair.”