A strong and courageous leader, Coach André touched many lives both during his time at Brooklyn College and prior, and his passing comes as a sad surprise to the Brooklyn College community.

“This comes [as] a shock to our entire BC athletics program,” said Bruce Filosa, Director of Recreation, Intramurals, and Intercollegiate Athletics at Brooklyn College. “Joe was someone who I had the opportunity to get to know very well during his five years working in our program. He was a very personable and loyal guy who loved what he did and enjoyed being around students and colleagues. I will always remember him fondly as a member of our staff, but also as a friend.”

As friends, family, and community members mourn, we are also reminded of all of the positive impacts that Coach André had on the people he came across.

André was a former CUNY student himself, studying at Lehman College, the school he returned to in 2008 as Head Coach of the Men’s Soccer team. He helped return the school to glory again, coming in second place in 2010 in the CUNYAC tournament and winning the championship in 2011, which came along with an automatic bid to the NCAA tournament. For his efforts, Coach André was named CUNYAC Coach of the Year.

André joined the Brooklyn College Men’s Soccer program as an assistant coach in 2014. Prior to the 2016 season, he was announced as the Head Coach of the BC Men’s Soccer program, and the Bulldogs have qualified for the CUNYAC Championship tournament every year since. André was also the Student-Athlete Advisory Committee adviser during his time at Brooklyn College, helping out student-athletes in their endeavors, which speaks to his selfless and personable nature.

Coach André was a kind and inspirational man, who always cared just as much about his players’ academics and health as he did their performances on the field.

“The death of Coach André [had] a big impact on me and everyone in the Athletics Department,” said Miguel De Anda, starting full back for the Men’s Soccer team, noting the coach’s young age. “He was a great coach, he didn’t deserve this.” 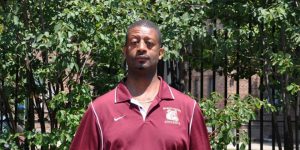 “He was always looking ahead and making sure we were good for the next semester,” De Anda said. “He cared for us. It was a wonderful experience playing under Coach André. He pushed me to be better on and off the field.”

An academic at heart, André was himself working on a second master’s degree from John Jay College.

On a personal note, Coach André also happened to be my first interview at the Brooklyn College Vanguard. Pen, notebook, and recorder in hand, I nervously asked my questions to him in the Fall of 2019, as his team lost by three goals the previous day. I was made comfortable, however, by Coach André’s genuine and thorough approach to his team’s faults and how they could improve.

He was a fan of the game of soccer, or “football,” as he and the rest of the world outside of the U.S. love to call it, and he appreciated the beauty of the game. Coach André, I hope, was happy in his final moments to know just how many people appreciated him, and still do.