Should we come back? 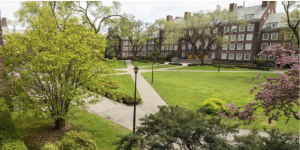 This is the question that’s been burning a hole in the back of my mind as we’re collectively rounding the corner on the final lap of the semester that would never end. It’s an incredibly simple one, and yet unpacking it has brought me to a breaking point the likes of which I don’t think I’ve felt in a long time. To call the last few months demoralizing would be mincing words, when the truth is that it’s been a thoroughly dismantling experience.

This isn’t a thought coming from clear out of nowhere. No, this is the result of compounding evidence that points to a very clear conclusion: the notion of getting an education in the midst of this pandemic feels downright ridiculous and schooling feels more fraught than it ever has before.

Let’s start in a very obvious place: Brooklyn College is not an online school. While I admire the efforts of the school to keep things running as smoothly as possible for us, I feel crazy carving out the time for an exponentially worse learning experience. This isn’t the fault of any one person, but just a flaw of the system.

Campuses are built to house schools and facilitate learning in-person and that’s always been the default mode of learning. They are facilities complete with equipment and staff to teach you everything from math to film production. Strip most of that away and you’re left with the vague impression of what could’ve been.

It’s not that online schooling is inherently bad, but that the conditions around it can be a huge indication of its effectiveness. Studies have shown that programs built with online learning in mind and that are opted into can be as effective as in-person teaching. The problem is we’re now about to be a year deep into a forced online program and a return to normal—to what we opted into— isn’t immediately in sight.

Without a return to normal (which I’m not pushing for as there is still a real and tangible danger), Zoom classes meant to supplant tried and true methods have become the “new” and it’s a pale imitation. Our education system was already admittedly quite the joke and now it has to figure out how to make this work all while we lose time and money to it?

This idea of the “new” has especially picked at me as I’ve considered the prospects a lot of us graduating in the aftermath of this pandemic are going to have. The “new” is what’s shaping a lot of people’s current educations, and if that is woefully lacking, how’s that going to affect those of us at the behest of it?

On paper, a degree should get you in the door, but in practice a lot of us are about to lag behind in the workforce or preparedness to even join it because we weren’t able to better learn what the hell we’re doing. What are we gaining at an institution that can’t provide us the experience we need to make it? What employer is going to charitably take us on at the deficit we’ll be taking into post-grad life and their ranks?

The situation is only worsening too. While vaccines are being lined up and some vague promise of normalcy lies in faint sight, we’ve still got hurdles to overcome; hurdles like the reduction in staff across all CUNY schools, which hurts not just the quality of teaching but the quantity of what we can be taught.

The hurdles also include fiscals problems way above our heads, like the diminishing resources these cuts could provide for, like technology for low-income and incoming students. The Vanguard’s own reporting has revealed that CUNY’s operating budget will be slashed by $46.3 million in 2021. Atop all that, NYS is withholding money that directly goes to the Tuition Assistance Program, another saving grace that simply helps students afford to get an education.

With so many barriers in the way of an affordable and quality educational experience, is BC or any school right now a feasible and sound decision? I don’t really have the answer myself, but it’s a question I reckon a lot of us should be thinking about as we move forward.

Moises Taveras is the Features Editor at the Vanguard. When he's not doing that, he's playing video games or spending far too much time on Twitter.
View all posts by Moises Taveras →
← Newer Post
Love is Not the Second Wave
Older Post →
A Message From The USG President