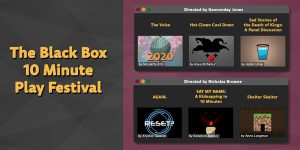 The Department  of Theater’s Fall 2020 programming came to a close with its third and final production this past weekend. The production, known as “The Black Box,” was a series of six 10 minute plays entirely produced by Brooklyn College BFA and MFA students.

Each play was unique with original ideas and ways of creating devised theater for an online format.

The festival was delivered to audiences through Twitch, an online streaming platform, with a mix of pre-recorded and live performances of all genres. This was very different from the platforms in which audiences watched other productions this semester, which were pre-recorded and edited through Vimeo.

There were both advantages and disadvantages to this shift in platform, and audience members were able to comment in a chat room while the show was in progress.

If the festival had happened on campus, there would be the expectation of silence from the audience so as to not disturb the actors, but the ability to have a continuous group thread throughout the 90 minute festival was ultimately distracting.

Audience members commented their reactions to the events of each performance, and while some comments were justified, some users got carried away.

What started out as a forum for praise of friends and loved ones turned into a personal conversation that often led further and further away from the plots of each play.

One audience member, identified as Bizbable, commented during a piece, “I love that this play seems to be about the intricacies of theater and boredom, but the chat is like ‘lemme hear more about these fish and socks.’”

As the show went on, the chats happening to the right of the performances seemed like a show in and of itself. Whether it was cheering on performers or rooting for characters in each play, the fragments of the audience created a setting that was comfortable yet disrespectful to other audience members trying to watch, as well as the actors who performed live.

Aside from the chat feature, the creative team behind the production found new and innovative ways to create theater for the new way of virtual life.

Some of the short plays differed from the now traditional way of virtual theater, where actors remain stationary with a virtual background. Directors and producers found ways to break from this static set, creating livelier pieces shot from multiple camera angles. One performance turned from reality entirely and was carried out on Minecraft.

The entire cast and crew of the production put their heads together to think up new ways of entertaining, and they were ultimately successful in bringing them to life.

The festival concluded with a live Q&A, which comprised mostly of audience members asking questions about the rehearsal and creative process for each show.

From the comments in the chat throughout the performances, the audience seemed to enjoy themselves and offered praise to all the creatives involved. Minor flaws aside, each performance managed to be different, felt like it was done outside the box, and proved engaging for audience members.