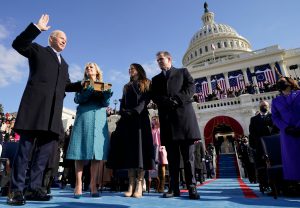 The road to inaugurating President Joseph R. Biden was filled with unprecedented moments,  securing its place in American history. For Brooklyn College students and others, witnessing the end of the Trump administration and the coming of a new one shows the country’s political divide.

“I knew there was going to be noise, just not this much noise,” said David Wray, who identifies as a moderate.

With Biden securing 306 electoral votes, 74 more than Trump, he was able to earn his seat as the country’s 46th president. Though Biden was also leading the popular vote, his opponent had over 74 million votes – a figure that stuck out to Steven Espinoza, a student who identifies as progressive.

“70 million people voted for Trump, and 70 million people are going to want another Trump,” said Espinoza. Before the election, Espinoza believed that the Biden transition would not come about smoothly. Nonetheless, he was surprised to see that Capitol Hill spiraled into chaos on Jan. 6.

“I was scared, just because of the fact that I knew Trump wasn’t going to concede. I knew regardless that Biden was going to get into office, but I kinda wanted to know how Trump was going to react,” he said.

The Capitol attack, which led to four people’s deaths, grew from a pro-Trump rally called “Save America,” while Congress was certifying Biden’s presidency. For Wray, the unrest of that day was unexpected but not surprising.

“The fact that they stormed Capitol Hill is abhorrent, but it’s not something like, ‘Oh, okay, this is something I didn’t expect at all. This is an action that’s never been taken,'” he said while referencing the summer’s Black Lives Matter protests as an example of unrest being nothing new. Wray noted that the attacks also showed “how oddly under-protected” the Congressional meeting place is.

“The fact that there weren’t many officers there or protection as there genuinely should be was a bit jarring for me,” said Wray. “I caught the news talking about it and like I come to expect from news stations, they leave out some information or just blatantly ignorant towards some of it.”

“It’s like when they said that the police led these rioters in – wasn’t true at all,” Wray said. “The police didn’t let them in, and even when I saw the video of some rioters breaking through the gates, they were trampling over police and pushing them aside.”

Videos and photos of rioters circulated social media during the attack, including Richard Barnett, a man photographed in House Speaker Nancy Pelosi’s seat. To Espinoza, who expected the attacks to be confronted with tear gas and riot gear, finding Barnett unharmed by Capitol authorities was an example of White privilege. “You can’t tell me not. If it had been any Black man or person of color, that’s it – they would’ve been shot,” he said.

As the riots took center stage around the world, an anonymous BC student, who identifies as an independent, believed that America’s reputation as a leading democratic nation was in shambles – marking a “dark day for our democracy.”

“I think this was a really, really big wake up call for not only us but for the rest of the world that democracy is not as stable as we think,” they said. “And you can’t ignore the undercurrents of what’s going on in the country just because some opinions don’t come up on the regular media.”

Against the backdrop of the COVID-19 pandemic, and aided by the riots and national death toll peering over 440,000, Trinity Lopez thought that Trump’s dispute of the election’s fairness was most frustrating given “the state we are in.”

“I knew that the Trump administration would deny the results of the election and refuse to see Biden as the winner, but it was sad especially with the pandemic, as we’re struggling to defeat it, that was the main issue,” said Lopez, who is a left-leaning Democrat. “Trying to debunk the results, instead of accepting them and moving forward – it was sad.”

Though Trump’s voter fraud allegations have been ruled without merit by over 60 courts, many of his supporters believed that the election was rigged, which led left-leaning Kristen Valdes to reconsider how people think or react to politics.

“It definitely changed my view on how gullible people can be, for sure,” she said. Prior to the pandemic and 2020, Valdes and Lopez were not as involved in politics as they are today. However, with the observance of social distancing rules and the growing reliance on politicians for COVID-19 information, the two students have become more politically aware.

“Watching politics every day, locked in your house, I wanted to be educated, and I was kinda forced to be educated at this time, and I’m glad I was because I had to vote,” said Valdes.

As the Trump administration came to a close, and Biden has assumed office as president, the divide between conservatives and liberals continues, most BC students opined. To moderate Wray, no matter who has become president, either a Democrat or Republican, he believes not much will change.

“You’re not in a war. Nothing terrible has transpired because of a Republican or Democratic choice. You will continue to live your life no matter who’s in power,” he said. “We’re not in a one-party, or one-dude tells you all to do. It’s not how it works here at least.” So long as his “quality of life” does not change with the Democratic shift in government branches, he does not mind the new administration.

For those who supported Biden as the “lesser of two evils” compared to Trump, the next four years will create some changes – one being a woman of color being the country’s first vice-president.

“Especially with Kamala, the first woman vice-president, that’s amazing to see,” said Lopez. “And knowing that she’s a person of color, and he’s electing people of color. Hopefully, things will be better.”

Though Trump has left office, his presence in politics continues as his second impeachment trial in the Senate draws near. Leaving behind his seat and over 70 million supporters, many BC students think that his legacy will seep into Biden’s term, so long as the strain between Democrats and Republicans continues.

“Either way, no matter who won, it was going to be an absolute shitshow – for lack of a better term,” said the anonymous BC student. “I think there was going to be a lot of tension that isn’t as visible as everyone thinks it is.”