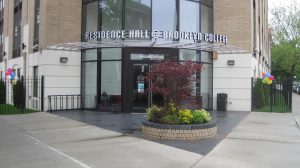 New York City’s Department of Social Services is facing pushback from local officials after announcing its plans to open a homeless shelter at the former site of the Residence Hall at Brooklyn College.

The DSS is coordinating with non-for-profit social service organization CAMBA to open a shelter for homeless families at the infamous dorm building on Kenilworth Place, which closed last July due to a lack of student applicants for the remote fall semester. The DSS plans to open the facility in late 2022.

“This high quality facility will offer 107 families with children experiencing homelessness the opportunity to get back on their feet safely and closer to their anchors of life in these unprecedented times,” a spokesperson for DSS said in a January statement to the Bklyner. “Working together with neighbors and not-for-profit service provider CAMBA, we’re confident that these New Yorkers will be warmly welcomed—and through collaborative support and compassion, we will make this the best experience it can be for all.”

Several officials representing the neighborhood where the building resides, however, have opposed the repurposing of the dorm. A joint statement from City Council Member Farah Louis, State Assemblymember Rodneyse Bichotte Hermlyn and State Senator Kevin Parker expressed a preference that the building be used for “affordable housing for CUNY students and seniors.”

The legislators also expressed concern about CAMBA’s partnering with the DSS, citing the CAMBA’s open violations of shelter repair standards. The Brooklyn-based organization, with programs offering services in anything from after-school programs to legal services, heads eleven shelters across the five boroughs. According to the city’s Shelter Repair data, the eleven shelters have accumulated over 40 violations from the city’s Department of Housing Preservation, the Department of Buildings, and the Fire Department.

“Transient housing is an inadequate approach to our city’s homelessness crisis and CAMBA has a poor track record of delivering services in sites across Brooklyn,” said Council Member Farah Louis. “I cannot support a project that I know would not alleviate existing constituent concerns, mainly economic and housing insecurity. It is imperative that this city tailors its approach to every community, ensuring that their specific needs are met not overlooked.”

Though CAMBA was unavailable for comment, a DSS spokesperson told the Vanguard about CAMBA’s involvement at the planned shelter on Kenilworth Place, detailing the organization’s provision of case management, counseling, and recreational programs at the building. In addition, it was reported that CAMBA plans to install security cameras and provide a minimum of twelve security staff members at the building at all times.

The building has not yet been purchased by the DSS or CAMBA, however, and the Residence Hall’s previous owner, Sefi Zvieli, could not be reached for comment.

“I proposed permanent, affordable senior or CUNY student housing at 1 Kenilworth Place because those are the priorities of the communities that I proudly represent in the 45th Council District,” Council Member Louis told the Vanguard. “It is my hope that we can explore all options during preliminary discussions with the appropriate City agencies, community residents, and elected officials to reimagine this project.”

The Residence Hall at Brooklyn College was never owned by CUNY or Brooklyn College, and the dorm’s closure, while following CUNY’s downward trend in applications due to the pandemic’s effect on out-of-state students and other potential residents, has been greatly owed to its reputation for floods, pests, and a hostile environment.

← Newer Post
College to Implement All-Gender Restrooms in Each Building
Older Post →
BC Nixes Thesis Film Shoots, and Approval for Fall 2020 May Have Been a “Misunderstanding”