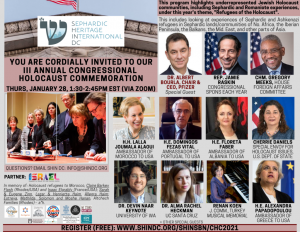 As time pushes us farther away from the 20th century and the horrors that were inflicted on those living through it, events commemorating the tragedies – like the Sephardic Heritage International (SHIN) DC III Annual Congressional Holocaust Commemoration Day – take on an undercurrent of urgency. Broadening the search for stories becomes a necessary component of remembrance as each year brings us farther from the Holocaust.

This year, the Congressional commemoration, on the occasion of International Holocaust Memorial Day, spotlighted the hidden crevices of history by focusing on the experiences of refugees from Sephardic lands of origin.

North Africa, the Iberian Peninsula, the Balkans, the Middle East, and other parts of Asia that Sephardic and Mizrachi communities call their home were center stage as guest speakers, representing those countries shared messages of hope and remembrance.

The Brooklyn College Judaic Studies Department co-sponsored the event, commenting that BC’s own Jewish population has students with descendants from places of Sephardic culture and practice.

“Many people know of the devastation that the Holocaust wreaked upon the Ashkenazi Jewish community–as well they should. Less often told in this story is the havoc it wreaked on many Sephardic and Mizrahi communities. This event told that story, and commemorated the terrible loss of Jewish life and community in Saloniki, the Balkans, North Africa, and beyond,” wrote Department Chairperson Professor David Brodsky in an email to the Vanguard.

SHIN DC hosted ambassadors to the US from places like Portugal, Greece, Morocco, and Albania to remember a time before the Nazi occupation, when the number of Jews living in their Sephardic communities reached the hundreds of thousands. H.E. Alexandra Papadopoulou, Ambassador of Greece to the USA, stated how her country has been home to the oldest Jewish community for more than 2,000 years.

“Our city Thessaloniki was the Jewish diaspora’s most important city for over five centuries. It is also the city that bore the brunt of the Holocaust very, very hard. So for my country, it is a moral obligation to remember the memories of those who perished during the Nazi occupation,” the ambassador said.

A reminder touted by historians and documentors of such tragedies is to not fall prey to the dissociation that comes coupled with learning about vast amounts of victims. They urge that one should focus rather on the individual story. At this memorial the hundreds of individual human lives lost in Thessaloniki became ten folds more personable when we learned of two people amongst the crowd: Mois and Sara Bourla – parents to the CEO and Chair of Pfizer, Dr. Albert Bourla.

Those listening from the start could acknowledge just how accurate the host of the event words were when he introduced Bourla to the audience.

“It is very inspiring that the children of the Shoah survivors are now on the frontline of fighting today’s plague,” he said.

But the event wasn’t about Bourla and the work Pfizer has done by bringing the COVID-19 vaccine to millions of Americans and citizens around the world – it was about sharing the stories of his parents Mois and Sara, and their survival of the Nazi occupation.

Bourla explained that as a young boy, he remembered gathering with his cousins in Thessaloniki to listen to the stories of horror and survival from his aunts, uncles, and his parents. Acknowledging that many Holocaust survivors took their stories with them to the grave, Bourla grew up with the constant reminder of his parents’ survival; the story his parents repeated completely devoid of hate or revenge.

“They did this because they wanted us to remember all the lives lost. To remember what could happen when the virus of evil is allowed to spread unchecked. But most importantly, so we could remember the value of human life,” he said.

Both of Bourla’s parents lost loved ones during the Nazi occupation of Greece, only avoiding joining them by sheer luck. Mois saw his family deported to Auschwitz, while he and his brothers stayed behind. As for Sara, her father was able to save her by convincing his eldest daughter to take her into her secular home before being deported to what the Nazis promised as Poland, but was actually Auschwitz.

Years later, with no one left, Mois and Sara met each other through a Shidduch (traditional Jewish meeting) and married. Dr. Bourla summarized towards the end of his speech that his father wished to see two things from him as he got older: for him to become a scientist and to marry a Jewish woman. Fortunately, Bourla made him happy in both areas.

Perhaps the most impactful moment from the event – considering what Sara and Mois endured in their earlier years – was the ending message Dr. Bourla imparted to the audience. He paused for a moment to regain himself and noted that this was the first time he ever publicly shared the stories of his parents.

“At this moment in time when racism and hatred are tearing at the fabric of our great nation, I felt that it was the right time to share the story of two simple people who loved each other, were loved by others, and who built a life of love and joy,” he said. “And that makes their son very, very proud.”

Web Group is a group @ Brooklyn College
View all posts by webgroup →
← Newer Post
BC Nixes Thesis Film Shoots, and Approval for Fall 2020 May Have Been a “Misunderstanding”
Older Post →
CUNY Journalists Tell Stories of Pandemic with New Podcast