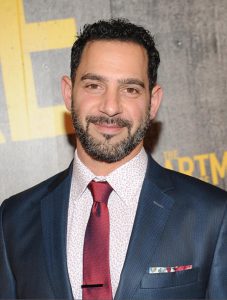 Amidst the chaos of transitioning to a fully remote semester last fall, the Brooklyn College Department of Theater hired Patrick Sabongui, as the new head of the BFA Acting program.

In an email sent to all students in the department last May, Kip Marsh, the chairperson of the Dept. of Theater, introduced Sabongui as the newest faculty member to oversee the BFA acting program.

“We couldn’t be more thrilled to welcome Patrick to the Department of Theater,” wrote Marsh. “[We] look forward to being able to introduce him in person to all of you soon!”

Sabongui is no stranger to acting and theater, having landed many well known roles in television and film over the years. Some might recognize him as David Singh from The CW’s television series The Flash or opposite Claire Danes in Homeland as Reda Hashem, a recurring character.

Despite all his roles in the industry thus far, Sabongui says he is just a theater maker with a sense of self.

“I think of myself as an artist first with a knowledge of who I am and what I believe in,” Sabongui told the Vanguard.

In getting the position as head of the BFA acting program on campus, Sabongui applied through standard job applications, and wanted to find a university to call home.

“I found the opportunity through the front door, which is rare for the line of work I’m in,” said Sabongui, referring to how the film industry can often be about who you know.

After receiving the keys to the program, Sabongui planned to focus on a new vision for it, including figuring out how Brooklyn College stands out from all other conservatory acting programs around the country.

With little history of the program given to him at the start of this new journey, Sabongui is trying to build something new as he revamps the program almost entirely. 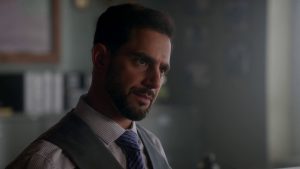 Patrick Sabongui as David Singh in The Flash. /StuntList.com

One thing he will focus on is outreach. The BFA acting program at Brooklyn College has gone mostly under the radar, as outreach to incoming students has been lacking in recent years. Sabongui wants to change this by giving more opportunities to students.

One of Sabongui’s main initiatives, he said, is to be “open to providing opportunities to people who have been historically denied opportunities.”

The program takes a turn for the better this way, as many students who have previously been denied privileges or involvement in the arts now have the opportunity to excel.

On top of running this section of the department entirely, Sabongui is an active professor at the college, teaching courses such as the fundamentals of scene study, movement classes, and acting for the camera, as well as being the main thesis advisor for students and the senior showcase advisor and director.

His goals for the department and its students are big, aiming to teach students that your undergraduate education is the foundation of what you will do and learn for the rest of your life.

“We’re all very excited to get our students to reach mastery in the program,” said Sabongui. “The end of undergrad is not the end, but rather the beginning.”

Being able to interact with his students and make connections is key for Sabongui’s vision for the program, but it may not always be easy for him, as he lives and works in multiple time zones at once.

While accepting and executing his position at Brooklyn College on the East Coast, Sabongui is also able to work on television and film in Los Angeles, he spoke to the Vanguard during his last day of quarantine for a television project set to shoot soon. On top of the three hour time difference, Sabongui often teaches from his home base in Vancouver.

On his overall view of the responsibilities he has within the program, Sabongui says he will plan, encourage, and teach students all they need to know and more.

“My job here is to give the students the tools they will then sharpen for the rest of their careers,” said Sabongui.