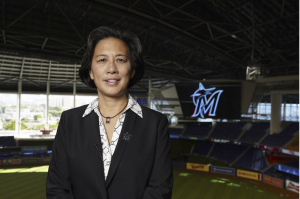 Kim Ng, who was just named GM of the Miami Marlins./ AP News

When the Mets hired Jared Porter to be the team’s general manager, one of the most coveted jobs in all of sports, they did so based on the many glowing reports they received from those in the industry.

Jared Porter would be later be fired on the basis of sexual harassment allegations that resurfaced from an incident in 2016, when Porter sent over 60 unsolicited inappropriate text messages to a foreign reporter he had come in contact with through work. In response to the news that broke surrounding Porter, Mets president Sandy Alderson, who hired Porter, held an impromptu press conference to address the incident and the media fallout that followed.

During the press conference, Hannah Keyser of Yahoo sports asked Alderson if he had consulted any women during the background check of Mr. Porter. Alderson stated that he did not.

“That’s one of the unfortunate circumstances that exists in the game today”, said Alderson. “There aren’t women in those positions with whom one can have a conversation and develop information and check references”.

This statement is partially true. According to the Institute for Diversity and Ethics in Sports, women made up 40.1 percent of the MLB Central Office professional staff. Of the total number of on-field coaching and player development roles, only 21 were filled by women.

There are 29 other teams besides the Mets, leaving very few women per team to call for references. Several teams Porter worked for before the Mets, however, did have women working in the same departments Porter did.

At least two women worked on the Cubs staff during Jared Porter’s tenure in Chicago and with Boston, although it’s unclear at this time how often he spoke with any of them.

Whether or not Alderson’s claims are factual, and there simply aren’t enough women in the game to contact for references, the lack of gender diversity in baseball is something teams have had control over. There have been many opportunities to hire competent women, but professional baseball has simply opted not to.

One such instance was in 2018, when the Mets ended their search for a general manager by hiring Brody Van Waganen to the position. Van Waganen was an agent with no prior experience managing or running a baseball team at any level. Further, he was the agent to several prominent players on the Mets which presented a clear conflict of interest.

Players routinely confide deeply sensitive information to agents. It’s part of the job. So for this person to then have hiring and firing power over these players is troubling to say the least.

This is also why it is puzzling that a name not to have been considered was Kim Ng. According to Anthony Dicomo of MLB.com, the Mets were said to have been prioritizing candidates with an extensive background in scouting and player-development. Ng, who is now the General Manager of the rival Marlins, has a resume few in baseball can touch.

Her accomplishments include 20+ plus years of front office experience, including her role as assistant GM for the Yankees. Her skill set and experience with the New York Yankees shows that she can handle big market payrolls, media, and player personalities.

Ng’s resume is filled with record-breaking accolades and clearly points in a direction of an ideal GM candidate. And yet, the Mets, and up until recently every other team in baseball, failed to hire her. In November, she became the first woman to be named general manager in baseball history.

Another instance occurred earlier this year, when the White Sox hired Tony La Russa to manage the ball club. Aside from La Russa’s recent drunk driving incident, problematic comments on race, and indifference to the nuances of a shift in the games culture, the White Sox hired La Russa. What’s most notable about the white Sox process… is that there wasn’t one.

According to the Institute for Diversity and Ethics and Sport at Central Florida, 97.5% of owners are white, 16.7% of managers are of people of color, and 13.3% of front office personnel are of color as well. How can we expect to see more change occur if we do not even hold a formal process to allow roles to be filled by nonwhites?

MLB has committed to combating gender and racial inequality through various programs and initiatives it has installed over the past three decades. In 2019,  MLB began its “MLB Club Diversity Fellowship Program,” a highly selective application-based program, aiming to create a pipeline for more diverse front offices. Additionally, MLB has several other initiates and resources that can be found on its website.

Hiring more women of all racial and ethnic backgrounds and more people of color should remain a top goal of the MLB. But unless this more inclusive vision comes with a changing of the culture that led Jared Porter to have glowing reviews, the game will still be broken.