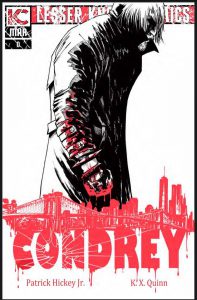 After nearly twenty years of uncertainty, Condrey has finally arrived. Published by Lesser Known Comics, and drawn by Kieran X. Quinn, this gritty, broken anti-hero is finally on paper. The brainchild of BC alum Patrick Hickey Jr., Condrey first came as an idea from an eighteen-year-old kid with a computer and love for comics. In the years following, Condrey was put on the back-burner because of Hickey’s career as a journalist and a professor of journalism at Kingsborough Community College. Regardless of distractions, Hickey was determined to get his story told.

“I was just some punk, eighteen-year-old kid with Microsoft Word, and I started writing. I was always a huge comic book reader,” said Hickey. Condrey is the tale of a damaged orphan raised in the New York City foster system. His father was killed, his mother disappeared, and the readers join him on his quest for answers. Though his tale on the page is just beginning, the release of Condrey #0 was the culmination of nearly two decades of hard work for Hickey.

“I’m still completely shocked. It’s like this huge weight has not only been lifted off of my shoulders, but it went straight into my heart and made me feel so much better about everything that I’ve done as a writer over the past 15 years,” said Hickey. “As a journalist, I hate to waste anything that I write. And so the fact that it’s finally out it feels like a big mission accomplished.”

Hickey cites prolific writers and stories known for their bleak and heavy stories like Frank Miller’s The Dark Knight Returns and Alan Moore’s The Killing Joke, as key influences on creating the harsh and lonely upbringing turned Condrey into the brooding behemoth we see on the pages.

“He doesn’t know what love is. He doesn’t know what it means to have a mother, a father, a role model,” said Hickey. “The thing is, he’s a lot stronger physically and emotionally than he can ever imagine. But no one’s ever shown him what he’s capable of.”

As a broken man beat down by life, time and time again, Condrey becomes fueled by revenge and the memory of his parents. He stands out from contemporary superheroes like the Caped Crusader, who lives by a code and acts for the greater good of Gotham City.

“Condrey doesn’t understand what the line is. He’s just hell-bent on getting the answers to his questions. Why was his father killed? What happened to his mother? That’s his guiding force,” said Hickey. “He’s not necessarily a bad guy. He’s not a villain at all, he’s just a good guy that has never been shown what goodness even is.”

On the surface, the comic is a grungy crime-noir with angry characters and ultra-violence. But as the story grows, so too does the titular character. The comic challenges the reader’s ideals as it challenges Condrey’s.

Far too often, dark stories are misunderstood as edgy gore-fests that serve as a twisted power fantasy. And while Condrey certainly is a violent beast, it’s not the greater sum of his parts. The struggles he faces change him as a person.

“The only way you truly learn about yourself is by putting yourself in uncomfortable situations. This comic is going to make people feel uncomfortable because of the violence,” said Hickey. “But other people are going to see it as a coming of age story; where this character is forced to become the best version of himself.”

Issue number zero only gave a sneak peek at Condrey, where we get a taste of his tragic backstory and a glimpse of his imposing presence. It’s made clear very quickly that this is an unforgiving world he lives in. However, Hickey’s story is more than its gory exterior.

While an interesting concept or flashy art-style may grab a reader’s attention, it’s the characters that make them stay. The people that inhabit the world they’re reading about are the anchor that keeps eyes glued to the pages. After spending so much time with Condrey and his cohorts, Hickey has gotten to know them on a first-name basis.

“I feel like there has been a level of intimacy between me and these characters, where they feel really authentic to me. And I think that’s something that will resonate with audiences if they give the comic a chance,” said Hickey. “These characters feel real and fleshed out, they don’t feel like a stereotype.”