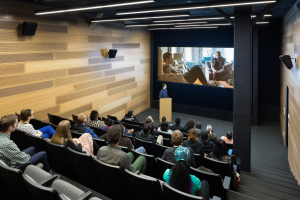 The Feirstein Graduate School of Cinema enticed potential students with a virtual tour of its facilities, including an 80-seat streaming room./
Chris Cooper

On Mar. 4, the Feirstein Graduate School of Cinema hosted a virtual open house and tour via Instagram live. With Richard Gladstein, the program’s executive director, and other members of the administration, the event aimed to entice applicants for the Fall 2021 semester.

Gladstein, a two-time Academy Award nominated producer, has been director of the school for six months and opened up the event with general facts and knowledge on the school’s location and an overview of programs offered.

After a brief introduction, viewers were introduced to Jung-Hun Kim, the Technology and Resources Manager, who took viewers on a tour of the school.

Located in the Brooklyn Navy Yard, the 68,000 square foot space is within close proximity to Steiner Studios, the home of The Marvelous Mrs. Maisel, the Amazon Prime show. In fact, the school is just a few floors up from the offices of the show.

“All of this is first rate, top notch, [and] completely pro,” said Gladstein.

With 200 students in total, the three-year program offers MFA degrees in writing, directing, production, animation and visual effects, media scoring, and much more. Each cohort holds about 70 students with acceptances every fall due to collaboration and intermingling of the tracks.

“The school is all about collaboration that is only possible by bringing people together,” said Gladstein.

Due to all the hands-on work required for these programs, the Feirstein Graduate School of Cinema is a rather unique Brooklyn College affiliated campus as there are more classes being offered in person than any other department at BC.

Jason Kliot, an Academy Award nominated producer and the head of the producing program, believes that what distinguishes this program from other top graduate film schools is not just the price, but also the attraction.

“NYU and Columbia are amazing programs, but it is hard to pay $65,000-$68,000 a year and house yourself in NYC,” said Kliot. “[At Feirstein] you are attracting people who never thought they could attend film school.”

Throughout the event, staff and faculty stressed the fact that once you graduate from the program, you are able to work and collaborate with other tracks with the possibility of getting a job in the track you choose to follow.

With all the films made by students over the course of a year, many have gone on to be entered in major film festivals and earn distinguished awards.

“You could leave this building with a complete feature film,” said Kliot.