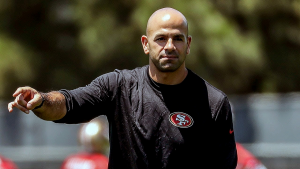 The Jets’ new coach Robert Saleh will need to use free agency as a chance to bolster his
team’s defense./ 49ersWebZone

NFL Free Agency officially starts this week, with players and teams starting talking contracts on Monday, Mar. 15, and all the New York teams are in different situations with unique challenges and possibilities as free agency opens up.

Firstly, The New York Jets are trying to rebuild their franchise, and this offseason is the start of it. Mainly, they hired Robert Salah as head coach, where he will most likely run the defense as well. Salah is an excellent hire because he is a good leader, but his defensive scheme with the San Francisco 49ers was basic, just running a regular cover three-zone almost every play.

The 49ers defense played well because of the team’s talent, which is an issue for Salah now because there is not nearly enough talent on this Jets defense, which will be the number one thing to address in free agency.

Mike LaFleur will be the Jets Offensive Coordinator after spending his time as the 49ers passing coordinator the last two seasons.  LaFleur will probably run a similar run zone scheme like his brother Matt LaFleur, the Head Coach of the Green Bay Packers, and use some of the same offensive playstyles as the 49ers.

The Jets will most likely look for players who fit in schemes like that, and they have the money to spend on the players they want. The Jets have just over $69 million to spend, which they can use to find pieces that fit their new star coaches. So far on defense, they brought in DE Carl Lawson for $30 million guaranteed to help the pass rush.

Salah definitely needs to add more talent to this defense, and he will look for players who can play in the 4-3 formation and play cover three-zone, otherwise known as the Seattle scheme. Franchising Marcus Maye at free safety is kind of an overpay, but he can perfectly fit into that roaming safety covering the middle of the field when healthy.

The priority has to be at cornerback because there isn’t anyone on the team right now who should be starting. The first corner in free agency that stands out immediately is William Jackson III. Jackson was often asked to cover the opposing team’s best receiver while on the Cincinnati Bengals, meaning they trusted him. Jackson isn’t a big name but is still an elite talent and definitely an upgrade with an 88.2 Quarterback rating against him.

The signing of middle linebacker Jerad Davis for a one-year $7 million contract, is a low-risk high upside signing. Davis fits right alongside C.J. Mosley as a thumper up the middle, but also someone who can cover a little, think of a young K.J Wright type in the Seattle scheme.

On offense, the best option for the Jets would have been running back Aaron Jones, but he has already re-signed with the Green Bay Packers. They could also try to bolster the offensive line because if the Jets decide to keep Sam Darnold, it would be good not to have him injured again.

The Jets have already sprung and signed former Titans wideout Corey Davis for three years and $37.5 million, but the Jets could still look to give Darnold some more offensive weapons. A name like Curtis Samuel could be someone who they could sign for semi-cheap, around $10 million, but would have a high upside. Curtis would fit right into the LaFleur system of jet sweeps and deep routes.

Now, the Buffalo Bills surprisingly have a decent amount of cap space, at around $10 million, and can use that to improve their roster. First off, they can get players for cheaper than expected because of the prospect of going and winning a Super Bowl.

The only holes that the Bills team has are that they need a second corner to play alongside Tre’Davious White, another wide receiver to go alongside Stefon Diggs, and their most significant need is a pass rusher. The Bills could go big and try to sign Melvin Ingram who has been a dominant force on the edge for the Los Angeles Chargers for a number of years. At age 31, you would not need to give him a long-term contract, but it might cost around $13 million a year.

Or they could try to lowball players by promising them a Super Bowl opportunity and go after players with prove-it contracts, such as Richard Sherman at corner, A.J. Green at wide receiver, and Carlos Dunlap as a pass rusher. All these players have been in the league for a while and have made their money. Using incentive-driving contracts, the Bills could find a way to not go over the cap by too much and fill all the holes on the roster.

The New York Giants are maybe in the most challenging position out of all the three New York teams. The Giants don’t have a lot of money to spend like the Jets, only having around $3 million in cap space, and on top of that, they have a lot of holes to fill after winning six games last season.

Now the Giants’ most significant gaps are that they need a number one receiver, an elite pass rusher, and a second corner to play along James Bradberry. The issue is that just a number one receiver will cost more than $15 million, the same as an elite pass rusher. The fact is that the Giants don’t have the money to fill in the holes that they have, so they will need to do it through trades and the draft.

They could try to sign Kenny Golladay, who is the only number one receiver available, but he will definitely cost more than $15 million. Now, if the Giants could make it work, that would be a perfect signing. The Giants signed John Ross to a one-year deal at $2.5 million, but that does not fill the hole of a number one receiver threat.

For pass rusher, the Giants were rumored to be in talks with Bud Dupree, but with him signing with the Tennessee Titans there aren’t many elite pass rushers left. The Giants could look at Hassan Reddick, who had 12.5 sacks last season, but those numbers are a little inflated with his five sacks against the Giants in week 14. The more affordable option could be someone like Takkarist McKinley, who is talented and could be cheaper with his history of locker room issues. At corner, this free-agent market has a lot of talent, and someone like A.J. Bouye or Malcum Butler could be someone who will sign a small contract along with being promised a starting job on a team that could be in the playoffs.

The New York football teams have a lot to think about with free agency starting, and each team has its challenges that they face building their ideal team.