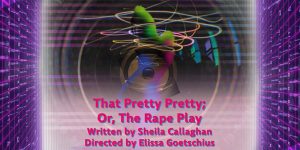 The Dept. of Theater’s Spring 2021 production season opened last week with “That Pretty Pretty; Or The Rape Play.” Directed by Elissa Goetschius, the show focuses on a pair of radical feminists who travel the country murdering right-wing pro-lifers and blog about it along the way.

This production, which was pre-recorded and streamed on Vimeo for five performances, came with a content warning for “violence/murder, sexual violence, eating disorders, homophobia, sexism, racism, emotional abuse, and toxic masculinity.”

Originally published as a novel in 2009, the play shows the mistreatment of Agnes (Mckensi Scy Pascall) and Valerie (Fran Manligoy) as a depiction of the misogyny that still affects women today. In addition, throughout the play, the male characters, Rodney (Jeremy Rosenblum) and Owen (Noah Firth) talk about raping women in a joking way. These controversial subjects and the way they are approached make for an uncomfortable experience all around with a rollercoaster of emotions.

Throughout the play, there are specific scenes created to show how desensitized some women have become to being violated due to how often it happens or how dismissive others are about it. In one such scene, a female character remains unfazed after being shoved on a bed and burned by a male character.

This is hard to watch. In fact, most of the play is for a variety of reasons both related and unrelated to the subject matter. This scene, however, is ultimately the least alarming as the play’s content only grows more intense.

Later on, the play depicts a full-blown rape scene, and the victim of the assault does not protest nor indicate any sign of distress. It is at this point it would seem the content of the play was aimed at depicting the horrors of rape in a non-stereotypical way, but the constant shifts in tone throughout make it hard for the audience to comprehend. This is the play’s main flaw.

“That Pretty Pretty, Or The Rape Play” tries to find a balance between the serious side and the humorous side of these controversial topics, and it fails significantly due to the nature of the material and the desensitized way it is handled.

One could argue that just because the play makes light of something that is reprehensible, it does not mean it endorses these messages or encourages this type of behavior. That is true and should be noted because the play does not romanticize any of it. It’s just that the humor is simply distasteful.

At one point in the play, a male character flirts with a woman and starts joking about raping her, knowingly making her uncomfortable. He finds humor in this while talking about how his mother is strong for succumbing to physical abuse and praises women for accepting violations of their sexual boundaries. This isn’t funny, and it shouldn’t be.

While this highlights one specific scene, this kind of dialogue is present throughout most of the play, and it comes off as a satirical attempt to criticize the way men often objectify women through the idea that it is a woman’s duty to suffer and remain strong through her suffering.

Again, one could argue that the play is not trying to be funny even if that’s the impression. This could be true or at least I would hope this is the case. However, the way the lines are delivered and the libretto is written make the intentions of the piece inexplicably ambiguous.

As for the other issues mentioned in the warning, the prevalence of eating disorders and negative body images comes about between the two female leads exchanging dialogue regarding weight, eating habits, and how one of them views “fat” people. A lack of self-esteem in one of these characters is alluded to throughout the play with the other character’s constant verbal abuse. These moments show how some women may be critical either on themselves or other women to the point that it is detrimental to one’s health.

Unlike the other issues, this aspect of the play is not as distasteful since there is some truth in these scenes when it comes to real world societal perceptions and how people interact with each other. Not to mention, the humorous dialogue is not as prevalent in these scenes.

In the end, the play seems like an unconventional attempt to create dialogue surrounding a variety of issues in an effort to create a better understanding of the horrors that surround them, but the dialogue created actually defeats this purpose as it often feels it’s being played for laughs.

As a result, the play serves as a distraction from these issues with a level of eccentricity that seems to lean more towards eliciting reactions from the audience than encouraging them to engage with the moments that are meant to educate. It’s all shock and little value.

Granted, “That Pretty Pretty, Or The Rape Play” is a meticulous play as it indirectly points out some of the problems many women face. These problems are often overlooked, and the message in this regard is admirable if you are willing to stretch your imagination that far.

On the other hand, the approach that the play took along with the way the lines were written, and therefore delivered, felt odd and more forced than natural at times. This, however, was to no fault of the performers.

If there is anything undoubtedly good that came from this production, it was great seeing the play being led by two women of color, a departure from what is normally prominent in the theater industry.

Another praiseworthy aspect of the production was the ability of the actors and actresses to interact remotely and paint the scene despite not having the privilege of performing with each other in the same room.

These practical aspects, however, do not save the play from its flawed execution of shedding a light on contemporary issues.

“That Pretty Pretty, Or The Rape Play” has a purpose in this regard, but its over-the-top approach seemingly makes a joke of things that are meant to be taken seriously, and this drowns out the issues more than it draws attention to them in an impactful way.

Perhaps, had the play been performed in person, some of these elements may have translated better, but due to the strained circumstances of the online format, the production already had a lot working against it regardless of the material. Then again, no matter the format, the play’s writing remains unchanged, and so the production may have very well been doomed from its foundation more than anything else.