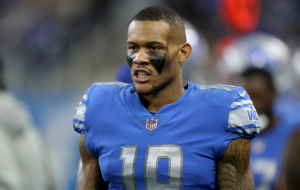 Kenny Golladay signed with the Giants for five seasons, despite missing many games as of late./ Getty Images

The Giants went 6-10 last season and still have a lot of holes to fill. With very little cap space, the team will need to find a way to make it work by restructuring contracts and signing long-term deals.

The New York Giants already hit their reset button last season with the hiring of Joe Judge as the head coach, and he has proved to be a fantastic hire. The season started slow, but somehow  by the end of the season, the Giants had a chance for a spot in the playoffs and the division title in a sub-par NFC East division.

One of the first moves the Giants made was to franchise tag Williams, but that lasted about a week before Williams signed a massive 3-year deal with $45 million guaranteed. The Giants did add a little more to the defensive side with the signing of inside linebacker Reggie Ragland and defensive end Ifeadi Odenigbo. Both players might be fringe starters and backups as the season starts, but they add depth to the defense.

The Giants also managed to sign corner Adoree’ Jackson to a big three-year, $39 million contract. The Jackson signing raises the heights of the Giants, as their second corner alongside Pro-Bowl corner James Bradberry was a revolving door of not-so-talented players. Jackson adds talent, a first round draft pick in 2017, to an already stacked secondary. If Jackson stays healthy, he can help raise the Giants defense to a new level, maybe even becoming a top-five defense in the league.

Last season, the Giants’ offense was the main thing that held them back and was the main focus going into this free agency. The offense ranked second to last in points and yards, just barely better than the 2-14 Jets.

A lot of that could be due to Saquon Barkley’s injury, but the Giants desperately need offensive playmakers, and they found a few. Kenny Golladay was by far the best free agent wide receiver this offseason and a clear number-one option. Golladay signed for the next five seasons, getting $40 million guaranteed. Golladay’s main issue has been health, having only playing in five games last season, but he is easily a 1,000-yard receiver along with ten touchdowns when he is healthy. In 2019, Golladay played 16 games, had 65 receptions, 1,190 yards, and an NFL leading 11 receiving touchdowns.

The Giants also signed speedy wide receiver John Ross, who holds the fastest speed in the 40-yard dash in the NFL combine, do-it-all tight end Kyle Rudolph, and multifaceted back-up running back Devontae Booker. Ross’s career has been plagued by injuries, only playing in 27 games in his four-year career and only in more than ten games once.

He signed a one-year deal, and with a lot of quality wide receivers already on the roster, it is unclear what his role will be. Rudolph is a great signing, as he is a red zone threat, especially because the Giants were the second-worst team in the NFL at scoring a touchdown within the red zone last season at only 46 percent of the time. Rudolph is also a solid blocker, making him valuable as a tight end who never has to leave the field.

Booker is a solid all-around running back who has never been a starter and will most likely replace Wayne Gallman as he seems to be gone in free agency. Booker is a career backup, but has a similar play-style to Saquon Barkley as a receiver and a runner. The only issue is that he is not a ground-and-pound, in between the tackles runner, but rather more of a recovering back, so maybe the Giants will look for another running back to be the short-yardage threat.

The Giants’ main goal this offseason was to craft a decent enough offense to go alongside its already top-of-the-line defense, and they were able to do that. This season they might look to win their first division title since 2011.