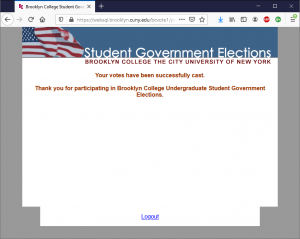 Coming into Brooklyn College, I was told many things, chief among them being, “You get what you put in.” BC is a commuter school though, where no one really “puts in” anything. Mostly we show up and show ourselves out. The “college experience” one might get from a private school in the middle of the Appalachian Mountains, this is not.

Getting involved doesn’t have to mean signing up for clubs or joining a team. These aren’t the sole modes of involvement and expression on campus nor should you be compelled to take part in them. As a student, your responsibility is getting your education and moving on. There is one thing, however, that I think students should at least look to get engaged in regardless of how you go about your time here, and that is voting for student government leadership.

I am not going to pretend like the student government has a lot of authority or power. It doesn’t. Those who truly have the keys to the quality of our education (and its cost) hold offices in Manhattan and Albany, not SUBO. We should also vote in those elections, but student government does have the ability to make our college experience better.

USG presidents and senators are the main liaisons between the will of the student body and the administration. Electing the right people, that care about being that throughway to the folks who make the real decisions, can make our time here that much easier and more enjoyable. In my time covering USG with the Kingsman and then the Vanguard, there have been USG Presidents that have cared a lot, and some who you never really heard from.

No one really notices a “bad” student government president, because it just means nothing is different, and nothing new is happening. But those who actually work at the job can aid students’ experiences in ways both out in the open, and behind the scenes. Some student governments take on a more engaged approach, pushing things like movie nights and fairs, which can make those willing to participate feel a little more like a community. Even if you don’t necessarily participate, it’s nice to see events on campus. For me at least, it gives a little school spirit.

Other USGs take a more administrative approach, as this last one under Ethan Milich did, which focused on outreach to the student body and sharpening how USG itself is run. Whether or not we notice these changes, Milich and members of his cabinet have helped accomplish things behind the scenes that help things like fairs happen, makes it easier for student voices to be heard, and for other benefits like streamlining club funding. Since COVID began, members of this USG have significantly affected school policy, including successfully pushing back against Proctortrack, a testing software that many believed infringed on student privacy, and helping extend the credit/no credit grading policy to the fall semester, providing an essential lifeline to students in crisis.

For the most part, students aren’t inclined to care about student government here at Brooklyn College and CUNY at large, which I can’t blame them for. There really is often so little power there, it feels negligible. But, I’d like to float the argument that we should care, and we should be paying attention. Not only does USG hold fairs and try to fight for students, but it also wields capital, or cash, which all comes from student fees. Funds from USG are passed along to clubs in order for them to operate but also to promote programs for student needs.

Perhaps it is also worth mentioning that members of the executive branch and cabinet receive stipends. Yes, they are paid and yes, it does come from you. And like any politician, they are beholden to serve those who pay them. So as far as “You get what you put in” is concerned, if we’re literally forfeiting our money to them, we should not only get a say in how that money is managed, but should flex that ability often.

Student involvement has always been a thorn in the side of student government, and nothing reflects that better than student voter turnout. Last year, only 3.5 percent of the undergraduate population voted in USG elections at BC. Only 56 students drew the margin between winner Ethan Milich and the runner-up, Michael Davis. All in all, only 586 students voted. That was actually a sizable drop from 7 percent the year prior, when only 1,054 students voted for USG president. To put that into context, BC has approximately 14,969 undergraduate students.

Until tomorrow, students still have time to vote for student government elections via BCwebcentral. You should vote not just because it is a way for you to engage with the institution you are a part of, but also because caring about stuff is cool and can be immensely beneficial to your life as a student. I hope you vote, if you haven’t already.