Approximately 66 million years ago, an asteroid hit planet Earth and brought to extinction 75 percent of the species on earth. This extinction event marked the Cretaceous-Paleogene boundary (K-Pg) and has virtually made it impossible to find fossils dating back to its time. Nonetheless, BC’s biological anthropologist and paleontologist Professor Stephen Chester and his team discovered a trove of thousands of mammalian fragments in Corral Bluffs, Colorado which opens up doors into how we came to be as a species.

“We now have literally thousands of undescribed fossils to study,” said Chester.

Before their recent study, Professor Chester’s colleague, Dr. Tyler Lyson, was on the hunt for post-K-Pg fossilized bones. He then realized that concretions, or masses of local sediment that harbored fossils, were best for discovering remains. Thereafter, the team began to search for rocks. The tactic paid off, and they found a bounty of skull fragments. 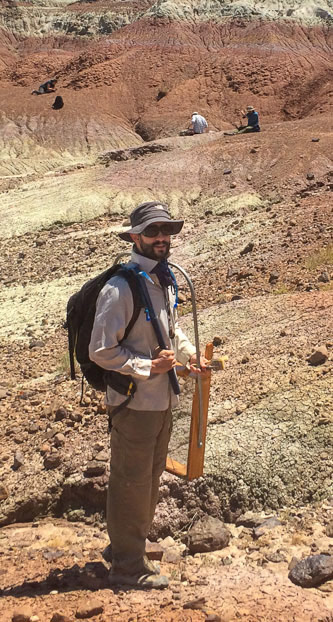 “Most of the extinct species of mammals that we collected were previously known only from jaw fragments,” said Chester. “Now with complete skulls, we can learn a lot more about the behavior of these extinct species.”

In a research article for Science, Chester and his collaborators mentioned that they found “unusually complete fossils of mammals, reptiles, and plants.”

Why did these fossils remain fully intact? “It’s difficult for me to explain well without using jargon,” Chester admitted. Professor Chester and his team’s findings show mammalian resilience and our ancestral large-bodied vertebrates’ ability to reappear on Earth after the disaster.

Some scientists credit the K-Pg extinction with contributions to mammalian evolution, despite limited evidence supporting the claim. Being that K-Pg drastically affected Earth’s composition and its inhabitants, paleontologists like Dr. Chester aimed to figure out how living things re-emerged despite the catastrophic aftermath.

According to Earth and Environmental Studies professor Constantin Cranganu, soot accumulation in the stratosphere and acidification of the planet’s water did not prevent Earth from re-establishing an abundance of life.

“Earth has proved many times to be a resilient planet,” said Cranganu. “The cosmic catastrophe that killed the dinosaurs was not the only one, but the last one of a long list of past asteroid impacts.”

Over time, through the carbon dioxide, polluted waters, and limited sunlight, the surviving plants photosynthesized.

“Not all plants were destroyed by the asteroid impact,” Cranganu explained. “Some terrestrial plants like marine flora contributed to the re-start of photosynthesis and, by extension, of animal life,” said Crangranu.

The occurrence of plant reemergence is supported by Professor Chester and his team’s discovery of 6,000 fossilized leaves and 37,000 pollen grains. This abundance of plant life created a steady food supply and produced plenty of oxygen, thus promoting the reappearance of large-bodied vertebrates and other animals, including our mammalian ancestors.

To better understand the behavior and qualities that these early mammalians and their surroundings exhibited post-K-Pg, Professor Chester and his colleagues used micro-CT scanning and 3D visualization software. In a documentary featuring Chester called “Rise of the Mammals,” paleontologist Lindsay Zanno stated that CT reconstruction scanning shows how “animals were as living, breathing creatures.” Furthermore, Professor Chester said that 3D visualization software is being used to configure the internal structures of the extinct creature, such as its brain cavity. With these two technologies, researchers can determine the attributes of an animal and its lifestyle.

“This information will allow us to better understand which senses these early mammals used to navigate their environments shortly after the extinction of the dinosaurs,” said Chester.

Many paleontologists continue their search to find out how our human existence came to be. Thanks to the efforts of Professor Chester and his partners, we are all one step closer to unveiling much sought after answers.